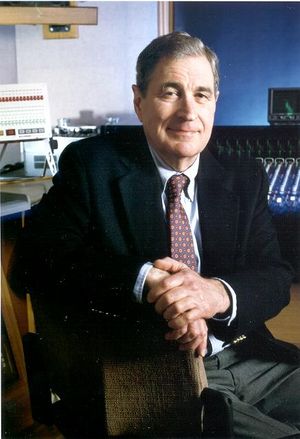 Ray Dolby invented several important technologies related to the recording and reproduction of sound for the studio, home, and theater.

Dolby was born in Portland, Oregon in 1933. As a child he showed an early preoccupation with sound. He started playing the piano at 10, and then took up the clarinet. He was fascinated by how reeds vibrated and why things sounded the way they did. For a while he nurtured an ambition to become a Hollywood cameraman and in 1948 took a job as a projectionist.

In was at this job that he met Alex Poniatoff, founder of the Ampex Corporation. Impressed by the young Dolby, Poniatoff invited the teenager to work with him. Dolby went to school three hours a day and worked five at Ampex. After high school he obtained an engineering degree from Stanford and earned a doctorate from Cambridge University in England in 1961. After completing his formal education Dolby spent two years in India setting up a scientific instrumentation laboratory as a United Nations adviser.

By 1965, the inventor set up Dolby Laboratories in London. His first customer was Decca Records. Dolby’s name was becoming virtually synonymous with the anti-hiss process, and he continually developed better ways to banish background noise. When the audio cassette became popular in the late 1960s, it was Dolby who helped make it a truly high fidelity format by introducing the Dolby B system of noise reduction, made especially for cassettes. When the new “Chrome” and “Metal” types of cassette tapes appeared, Dolby Labs designed Dolby C noise reduction for them.

Meanwhile, Dolby noise reduction began to be used for the making and playing of motion pictures. The 1971 film A Clockwork Orange was the first film with the Dolby encoded soundtrack. The company moved more and more into motion picture technology, and designed a new kind of high fidelity optical and magnetic soundtrack system called Dolby Stereo in 1974. The system’s features included “surround sound” channels. The 1977 films Close Encounters of the Third Kind and Star Wars helped raise the public’s awareness of Dolby Stereo in theaters. Dolby also became a part of FM broadcasts about the same time, and by 1975 more than 100 stations in the United States used it.

In recent years, Dolby technology has been used for hundreds of motion pictures, television programs, video recordings, and audio recordings. Today the company remains a leader in developing digital audio and video technology.

In 2010, Dolby was awarded the IEEE Edison Medal “For leadership and pioneering applications in audio recording and playback equipment for both professional and consumer electronics.”

My Ten Years at Ampex and the Development of the Video Recorder, by Fred Pfost, an early colleague of Dolby's