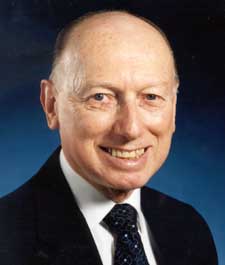 Scientist Peter C. Glaser is best known for promoting his idea of generating electricity in space for use on earth. Throughout a long and illustrious career Glaser has remained a staunch supporter of solar-power satellites.

Glaser was born in Czechoslovakia, but immigrated to the United States. For much of his career (1955 to1994) he worked at the Arthur D. Little Corporation, a Cambridge, Massachusetts-based consulting firm. From the late 1960s through the late 1980s, Glaser also worked with NASA to implement numerous scientific experiments carried out in space or on the moon. One of his most notable credits is his role as project manager for the Apollo 11 Laser Ranging Retro-reflector Array. It was installed on the surface of the moon on 20 July 1969 and is still functioning today.

It was in late 1968 that Glaser first proposed a new kind of space satellite that would collect solar energy, convert it to microwave frequencies, and beam that energy back to the earth’s surface. There it would be collected by special antennas, electronically converted back to low frequencies or direct current (DC), and used to supplement existing earth-bound power plants. Although Glaser received a patent for this idea and many researchers including his friend and fellow engineer William C. Brown worked to design this satellite, in the end it was decided not to try to launch it. Although many agree that current technology is advanced enough to make solar-power satellites a reality, others are wary of the daunting expense. Glaser’s promotion and support of solar-power satellites as a clean and cheap alternative to fossil fuels, however, has been unwavering.

In 1989, Glaser formed an NGO—a Non Governmental Organization—to work in support of space power and to act as advisors to members of the United Nations Economic and Social Council. He served on the boards of several organizations concerned with the commercialization of space-based power, and also acted as a member of the U.S government’s National Academy of Science and Office of Technology Assessment. He is a fellow of the American Association of the Advancement of Science and the American Institute for Aeronautics and Astronautics, and a member of the International Academy of Astronautics.

Retrieved from "https://ethw.org/w/index.php?title=Peter_Glaser&oldid=146821"
Categories:
This page was last edited on 16 February 2016, at 16:39.
About ETHW
Policies and disclaimers