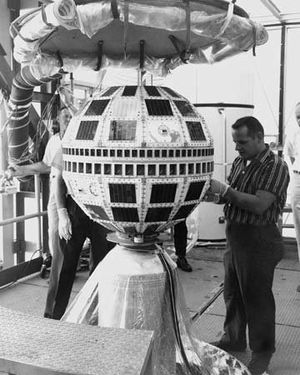 Telstar II Satellite for use at the parade of progress show at the public hall, Cleveland, Ohio, August 14th, 1964

Topics pertaining to designing vehicles and their electronic systems meant for flying in the atmosphere or in space. See also IEEE Aerospace and Electronic Systems Society History

This category has the following 10 subcategories, out of 10 total.

The following 17 files are in this category, out of 17 total.

Retrieved from "https://ethw.org/w/index.php?title=Category:Aerospace_engineering&oldid=105965"
Category:
This page was last edited on 30 July 2014, at 19:13.
About ETHW
Policies and disclaimers