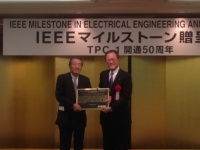 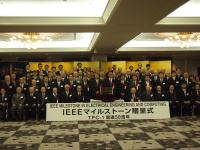 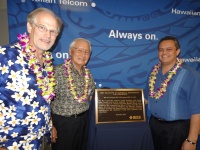 The “TRANSPACIFIC CABLE Construction and Maintenance Agreement”, entered into in February 1962 by American Telephone and Telegraph (AT&T), the Hawaiian Telephone Company (HTC), and Kokusai Denshin Denwa (KDD), delineated a submarine cable system between Japan and Hawaii. TPC-1 was to provide transpacific telephone and other international communication services between the USA and other countries on the east and Japan and other countries on the west. TPC-1 was initially to link Japan and Hawaii to (1) the mainland of the USA with cables between Hawaii and California and (2) South East Asia with the Guam-Philippines cable.


TPC-1 became operational on the 19th of June 1964 with the congratulatory speeches of President Lyndon Johnson of the USA and Prime Minister Hayato Ikeda of Japan noting the importance of the project for the USA and Japan. TPC-1 contributed to a closer relationship and to mutual development in cultural and economic terms between the USA and Japan. It also triggered the rapid development of submarine telephone cable networks in Eastern Asia, providing considerable communications capacity between Eastern Asia and both the USA and Europe.

TPC-1 was an 83 million (US dollars) project (New York Times, June 19, 1964), that adopted the “SD submarine cable system” which was then state of the art technology developed by AT&T Bell Laboratories based on earlier SA and SB submarine cable systems. A Japanese submarine cable manufacturer “Taiyo Kaitei Densen” (Ocean Cable Co., Ltd) was newly established for the TPC-1 project, and produced cables installed between Japan and Guam under AT&T supervision. The SD system was also adopted for HAW-2 and for Guam-Philippines cables, which were also installed in 1964.

After the installation of the Guam-Philippines cable in December 1964, the coupled TPC-1, Haw-2, and Guam-Philippines systems provided the main cable network in the Pacific area and operated for more than a quarter century. This expanded TPC-1 had its 50-year anniversary in 2014.

TPC-1 was also cross connected at Hawaii with COMPAC, the British Commonwealth cable linking Canada, New Zealand and Australia, which opened for service in 1963. This formed the yet more expansive Pan Pacific coaxial submarine cable network.

The international telephone quality of the longest multiple links between Japan and Europe through (1) TPC-1, (2) the trans-continental links in North America, and (3) the trans-Atlantic submarine cable were proven from the outset to meet CCITT recommendations for international voice services.

In order to satisfy the need for stable telephone communication between Eastern Asia and the U.S.A./Europe, establishing a new world order after the second world war, the U.S.A. and Japan agreed to construct TPC-1 as a national project for both countries and, AT&T, HTC and KDD signed the "TPC-1 Construction and Maintenance Agreement (C&MA)" in February 1962. TPC-1 improved the voice communication between Asia and the U.S.A./Europe from the previous media, interruptible and unstable "short wave radio". After the completion of the construction, the telephone traffic through TPC-1 grew more than 50 percent every year, which demonstrated the significant contribution and importance of TPC-1 to the social and economic activities between Asia and the U.S.A./Europe. The telecommunication development in quality and quantity introduced by TPC-1, together with the development in transportation, drastically enhanced the inter-continents activities in community exchange and import/export. This increase showed the potential growth in telecommunication traffic between Eastern Asia and the U.S.A./Europe, which accelerated the construction of submarine cable networks in East Asia and South East Asia (such as JASC, China-Japan, Korea-Japan, Taiwan-Okinawa, OLUHO, ASEAN cables with the total lengths more than 10,000km), and subsequently contributed to the harmony between Eastern Asia and the U.S.A./Europe. The significant part of the SD cable, manufactured by OCC, and some telecommunication equipment, such as channel banks, echo suppressors, international telephone exchange switches for TPC-1, were developed and manufactured in Japan under the co-supervision of AT&T and KDD. AT&T, HTC and KDD’s enhanced coordination and collaboration in implementing TPC-1, lead to the successful achievement of TPC-1 and subsequent future cable systems active today.

Article on the COMPAC cable between Canada and Australia and New Zealand http://ieeexplore.ieee.org/stamp/stamp.jsp?arnumber=5176172