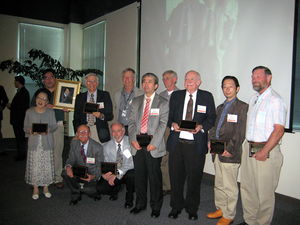 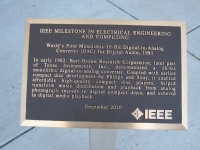 The plaques may be viewed at:

The PCM53/DAC700 was the world's first monolithic 16-bit DAC. Designed by Jimmy Naylor and TI / Burr-Brown data converter design team,[1][2][3][4] this product played a key role in transforming the music industry from analog audio tapes and vinyl long play discs (LPs) into digital audio compact discs. This 16-bit DAC was designed in to almost all major manufacturers of CD players when the compact disc player was emerging as a superior digital audio apparatus and led TI / Burr-Brown to dominate the digital audio data converter market with more than 80% share for several years. The TI/ Burr Brown DAC was mentioned in the movie “The Italian Job”. This unique monolithic chip and its fundamental achievement together with the technical advances in audio and speech processing, digital signal processing, which occurred in the 1970s and 1980s,[5] resulted in digital audio[6] overtaking analog audio and spawning a new digital audio industry that is still expanding today with the introduction of a new generation iPods and other MP3 players.

For the first time, a complete 16-bit monolithic DAC had been integrated into a single chip with all the components necessary for a high performance digital to analog converter. Up until this point all 16-bit DACs were multi-chip hybrids that are not functionally complete because external components must be added and they were very costly to build. When Sony and Philips were designing the digital audio players, there were three fundamental problems that needed to be solved:

TI / Burr-Brown’s design team were already working on a monolithic DAC for industrial markets, but the TI / Burr-Brown team stepped up the pace and were first to the emerging audio market. The differential linearity laser trim algorithm made the DAC "sound better” with lower Total Harmonic Distortion (THD) that was better than if you trimmed for absolute linearity. This was the best performance audio DAC of its time with much improved reliability over the older hybrid design which required multiple chips and over 100 wirebonds. With the help of TI/Burr-Brown Japan’s super sales and applications team the 16-bit monolithic converter DAC was designed in to almost all major manufacturers of CD players and dominated the digital to analog audio converter market with more than 80% share for several years.

To reduce a multichip hybrid converter design to a single chip, several obstacles had to be overcome in the late 1970’s or early 1980’s: Power consumption changes on a single chip will cause thermal gradients that affect temperature sensitive components introducing offset, gain, and/or linearity errors. Since thermal gradients on the chip surface take a few hundred microseconds to stabilize after a power change, the settling time of the DAC output could be adversely affected. This phenomenon is sometimes referred to as a thermal settling “tail.” Minimizing the die size precluded the use of large capacitor values that is common in a hybrid design, for the compensation of amplifiers or for suppressing switching transient. To realize the new single chip monolithic DAC, and holding the die size to less than 20,000 square mils to minimize the cost per die, required an innovative process technology. Rather than using a conventional 40 V bipolar process used for many analog circuits, a thinner epi process yielding 20 V BVCEO transistors was chosen. This saved considerable die area as typical transistor geometries are approximately 50 percent smaller.