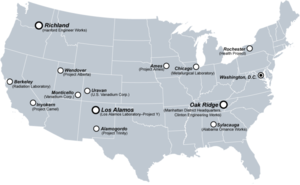 A selection of major United States sites in the Manhattan Project.

In August 1942, the U.S government called on top scientists and military officers to form a project named the Manhattan Engineer District under the direction of Brigadier General Leslie Groves. The District’s secret mission was to develop an atomic bomb. The research for the bomb would be undertaken at laboratories at Hanford, Washington; Oak Ridge, Tennessee; and Los Alamos, New Mexico. It was at the last site that a team of scientists led by University of California at Berkeley physicist J. Robert Oppenheimer built an atomic bomb in an undertaking known as the Manhattan Project.

Well before the Project’s official establishment in August 1942, a number of American scientists were already working on the development of such a weapon. Most notable of these was Enrico Fermi, who was experimenting with uranium at the top-secret Metallurgical Laboratory at the University of Chicago, where he also began work on a man-made nuclear reactor, CP-1. However, Fermi’s work and the work of other nuclear physicists was not a science project, but a weapons project and as such, it was soon consolidated under military leadership and control.

By the end of 1942, Fermi and his team of scientists at the University of Chicago produced the first controlled nuclear reaction, a non-explosive demonstration of nuclear fission producing small amounts of heat and radiation under carefully monitored conditions.

Throughout 1943, work conducted on two types of atomic bombs, one using uranium, the other plutonium (an artifical element extracted from uranium). Plutonium production reactors and processors were built in Hanford, and uranium enrichment plants at Oak Ridge, while scientists at Los Alamos refined their “weapon delivery” system (the method of transporting the large and dangerous weapon to the battlefield). By the start of 1945, the project was showing definite progress, with the uranium bombs near completion and the prospects for the plutonium bombs improving as well.

Following the death of Franklin Roosevelt in April of 1945, President Harry Truman was told about the atomic bomb project. By May, the military was mulling possible Japanese targets (Germany had surrendered to the Allies on 8 May). On 16 July the first full atomic bomb test and the first nuclear explosion in history—referred to as Trinity—was conducted at the Alamogordo Bombing Range in New Mexico. It vaporized the steel tower from which it was detonated and caused extensive damage to the surrounding countryside. This power was profoundly troubling to Oppenheimer who had ethical issues with the project from its inception.

Although the explosion brought up a host of moral questions, the technical goals of the project were met and the Manhattan Project was declared a success. Two bombs were readied for combat use, “Little Boy” (containing uranium-235) and “Fat Man” (containing plutonium-239). These were dropped on Hiroshima and Nagasaki, on 6 August and 9 August respectively. Japan surrendered five days after the second bombing.

Retrieved from "https://ethw.org/w/index.php?title=Manhattan_Project&oldid=177995"
Categories:
This page was last edited on 6 December 2019, at 15:31.
About ETHW
Policies and disclaimers