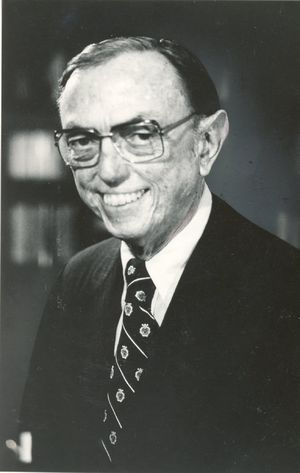 Joseph Mayo Pettit was born July 15, 1916, in Rochester, Minnesota. He graduated from the University of California at Berkeley where he received his B.S. degree in electrical engineering in 1938. At Stanford University, he earned the degree of Engineer in 1940 and the Ph.D. in 1942. From 1940 to 1942, Dr. Pettit served as an instructor at the University of California. He then joined the World War II radar countermeasures project at the Radio Research Laboratory of Harvard University.

Following the war effort, Dr. Pettit became Supervising Engineer with Airborne Instruments Laboratory, Inc. in New York where he remained until joining the faculty of Stanford University in 1947. At Stanford he was named Professor of Electrical Engineering in 1954, and became Dean of the School of Engineering in 1958-a post which he held until 1972 when he assumed his present position as President of Georgia Institute of Technology in Atlanta.

Dr. Pettit has spent almost his entire career in engineering education. As a teacher at Stanford, he developed two textbooks: "Electronics Switching Timing and Pulse Circuits" in 1959, and "Electronic Amplifier Circuits" in 1961, the latter with M.M. McWhorter. He also coauthored "Electronic Measurements" with F.E. Terman in 1952.

Dr. Pettit has been an active member of the IEEE and its predecessor organizations for almost 50 years. He was elected a Fellow of the Institute of Radio Engineers (IRE) in 1954 and served on their Board of Directors during 1954-55. He also served as a member of the IRE Fellow and Education Committees and was elected a life member of IEEE in 1982.

Among his many activities, Dr. Pettit was instrumental in founding WESCON, having served as Chairman of the Pacific Coast IRE Convention in 1949. Recently, he was founding Chairman of SOUTHCON, established in Atlanta during 1981.

Dr. Pettit has long been active in the American Society for Engineering Education and has twice been a member of their Board of Directors in addition to serving as President during 1972- 73. Among his many other activities, he has served on the Council of the American Association for the Advancement of Science, and was elected to the National Academy of Engineering in 1967 and served on its governing council during 1973-79.

Dr. Pettit was awarded the Presidential Certificate of Merit in 1949 for his World War II contributions. He served on the National Science Board from 1977 to 1982, and has been an advisor to the National Science Foundation in various other capacities. Among his international activities, he was an advisor from 1965 to 1973 to the Ford Foundation in Mexico and Latin America, served as a technical consultant to the Organization of American States from 1967 to 1972, and was elected to the National Academy of Engineering of Mexico in 1981.

Dr. Pettit married the former Florence Rowell West in 1940. They have two daughters and a son. (Editor's Note: Dr. Pettit passed away on 15 September 1986 in Atlanta, Georgia.)

Dr. Pettit was awarded the 1983 IEEE Founders Medal "For contributions in electronic and engineering education; for leadership in engineering organizations; and for service to the world as an advisor to government and industry."

Retrieved from "https://ethw.org/w/index.php?title=Joseph_M._Pettit&oldid=146389"
Categories:
This page was last edited on 1 February 2016, at 20:26.
About ETHW
Policies and disclaimers