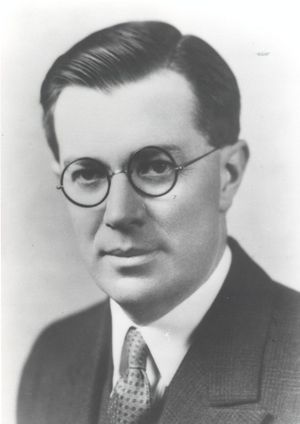 Frederick E. Terman, IRE President, 1941, viewed as one of the founding fathers of the Silicon Valley. He is also the author of Radio Engineering, which would become an important textbook for the profession. 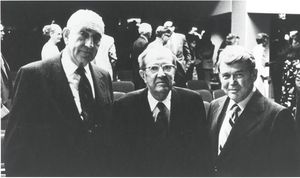 David Packard, Frederick Terman and William Hewlett at the 1977 dedication of a Standford building named in Terman's honor

Frederick Emmons Terman was born in English, Indiana, on 7 June 1900 to Lewis M. and Anna Terman. His father is best known as the co-author of the Stanford-Binet IQ Test. Frederick entered public school at the age of 9, as his father spent time educating his son at home.

In 1910 the family moved to Stanford as a result of his father’s appoint to the Stanford Psychology Department. Educated at Stanford University, Frederick received the B.A. in chemistry in 1920, and the E.E. in 1922. In 1924 he was given the D.Sc. in electrical engineering by the Massachusetts Institute of Technology (MIT), where he studied with Vannevar Bush. It was only the 8th Ph.D. awarded at MIT.

Terman joined the electrical engineering faculty of Stanford in 1925 as an instructor, and by 1942 had become full professor and executive head of the electrical engineering department. Some of his most notable achievements came as an educator and administrator, though his work as a researcher in radio engineering was also very successful. During this early part of his career at Stanford, he taught David Packard and William Hewlett and encouraged them both in their research and in their desire to found a business together.

In 1932 Terman published the seminal textbook, Radio Engineering. There were four editions of this textbook. It would become the bible for the profession. In 1943 he followed the success of this work with his publication of a handbook for radio engineers.

At the outbreak of World War II, Bush asked Terman to come work in Massachusetts. From 1942 to 1945, he directed the Harvard University Radio Research Laboratory, which was associated with MIT’s Radiation Laboratory. The main work of the laboratory was research and development of radar countermeasures and it had a staff of 800, though it also worked closely with industrial contractors. Terman’s efforts to support war efforts led to his being decorated by the British government and receiving the Presidential Medal of Merit in 1948.

Returning to Stanford in 1945, he was appointed dean of the school of engineering. After the war, he took steps to unite Stanford’s interests with those of private companies. When Stanford set up some vacant land as an industrial park, he courted technology corporations as tenants, hoping to assist Stanford graduates in finding jobs. Hewlett-Packard, General Electric, and Kodak moved in and made Stanford Research Park one of the most successful such sites in the world. As a result, Terman is viewed as one of the founding fathers of the Silicon Valley.

Terman also continued to actively support research work at the university. While he was there, the Stanford became involved in investigations with traveling wave tubes and emerged as a leader in academic work in electronics. Terman advanced through the ranks at Stanford. Upon his retirement in 1965 his title was Provost and Vice President.

A past President of the IRE (1941), Terman was also a member of the AIEE, the American Physical Society, the American Society for Engineering Education, and the National Academy of Sciences. He was one of the 25 founding members of the National Academy of Engineering in 1946. Terman was the author of a number of books and technical papers on radio. He was awarded the IRE Medal of Honor in 1950 “for his many contributions to the radio and electronic industry as teacher, author, scientist and administrator.”

Terman received honorary doctorates from Harvard, University of British Columbia, and Syracuse University. In 1951 he was elected Eminent Member of Eta Kappa Nu and in 1956 the AIEE awarded him its first Education Medal. In 1963 he made a memorable speech before the IEEE annual banquet entitled Impossible Except for Electrical Engineers

In 1928, Terman married one of his father’s graduate students, Sibyl Walcutt, an expert in reading education. They had three sons, including Lewis, who served as 2008 IEEE president. Frederick Terman passed away on 19 December 1982, in Palo Alto, CA.

Retrieved from "https://ethw.org/w/index.php?title=Frederick_Terman&oldid=145810"
Categories:
This page was last edited on 25 January 2016, at 20:30.
About ETHW
Policies and disclaimers