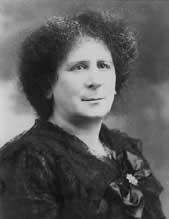 Hertha Ayrton was a prominent mathematician and the first woman to be elected to the Institution of Electrical Engineers, the British counterpart to the IEEE. Ayrton was born Phoebe Sarah Marks in Portsea, England. Her father, a Polish-Jewish immigrant, ran a small jewelry and clock business, but when he died in 1861 he left little to his wife and Phoebe’s five brothers and sisters.

Despite her humble origins, Marks was able to study at Girton College of the University of Cambridge in England and to take her degree in mathematics from the University of London. Soon after finishing college she decided to change her name from Phoebe to Hertha. A few years later she married William E. Ayrton and was thereafter known as Hertha Ayrton.

Ayrton assisted her husband, a physics professor at a small technical college, in his electrical experiments and became an expert on electricity. She had one minor mechanical invention and conducted experiments on the formation of ripples in sand. She became interested in the behavior of all sorts of waves, not just those formed in sand, and with her husband she experimented with electrical waves. This carried her toward studies of electric arcs, a “hot field” in the late 19th century. Ayrton would publish a book on subject of electric arcs in 1902.

Aryton’s work attracted a lot of attention, and she became a well-known electrical expert in Great Britain, working for the Navy from 1905 to 1910 on the standardization of carbon electrodes used in searchlights. Ayrton’s husband died in 1908, but she continued to pursue a career as inventor and scientist. During World War I, she invented a mechanical device called the Ayrton Fan which was intended to clear battlefields of poisonous gasses. Unfortunately, it was not adopted by the military. She died in Sussex, England, on August 23, 1923 from septicemia (a blood infection).

"Personally I do not agree with sex being brought into science at all. The idea of 'women and science' is entirely irrelevant. Either a woman is a good scientist, or she is not; in any case she should be given opportunities, and her work should be studied from the scientific, not the sex, point of view".

Retrieved from "https://ethw.org/w/index.php?title=Hertha_Ayrton&oldid=146081"
Categories:
This page was last edited on 28 January 2016, at 17:03.
About ETHW
Policies and disclaimers