A battery converts chemical energy into electric energy. It is a connected bunch (or “battery”) of electro-chemical devices. The Italian inventor Alessandro Volta invented the first battery in 1799. Volta’s battery was called a pile—a messy stack of disks made of two types of metal. The discs were separated from each other by pieces of cloth soaked in salt water. The chemical reaction between the different metals and the salt water generated electricity. Volta gave his name to the unit of electromotive force, the “volt.”

The pile or battery remained a laboratory curiosity for years, until the newly invented telegraph and telephone created a demand for reliable electrical power. After many years of experimentation, the “dry cell” was invented in the 1860s for use with the telegraph. The dry cell is not completely dry, but it seems dry in comparison to the voltaic pile. It holds a moist paste inside a zinc container. The interaction of the paste and the zinc creates a source of electrons. A carbon rod is inserted into the paste and conducts electrons to the outside of the cell, where wires or metal contacts carry the electrons that power the device. A single dry cell produces about 1.5 volts. Dry cells can be stacked inside a single container to produce batteries with other voltages. The small 9-volt batteries used today are a good example of this.

After 1900 automobile designers also began demanding better batteries. Thomas Edison worked on smaller, "alkaline" batteries (based on nickel and iron) in the early 1900s, because he believed they could be excellent sources of power for electric cars. At that time, the superiority of the gasoline automobile had not yet been demonstrated, and there were many electric cars on the market. Edison’s work on batteries advanced the state of the art, but electric cars never achieved much success, and in fact almost disappeared by 1930. But the battery did become a permanent feature of every automobile. It was not used to power the car itself, but to operate the starter and to supply energy to the ignition systems of the rapidly evolving gasoline automobile. Today, the battery is an essential part of every automobile. In many ways, most auto batteries still resemble the lead-acid batteries that powered most electric cars in the early 1900s. Inside a sturdy box are heavy lead plates, separated by a liquid acid solution. As in other batteries, the chemical reaction between the metal and the chemicals that are dissolved in the liquid creates a source of usable electricity. Today’s automobiles carry with them a small electric generating system that partially reverses the chemical processes in the battery which are responsible for generating electricity, and the effect is to "recharge" the battery while the engine is running.

The next big boost for the battery was the invention of radio broadcasting in the 1920s. Most homes in the 1920s still did not have electric service, so it was necessary to use batteries to power a radio. Many early radios required two or three batteries of different voltages to supply various circuits. These were usually designated as the “A,” “B,” and “C” batteries. Two of these batteries could be small dry cells, but one of them was usually a large, acid-filled battery that could ruin furniture and carpets if it was knocked over. Later, in the 1930s, engineers designed more efficient radios that used much smaller dry cell batteries, but these still had to supply up to 90 volts or more to operate the radios’ vacuum tube circuits. That is very high voltage compared to today’s radios, which need only a 9-volt battery to operate. Fortunately, most homes got central station electric power by around 1940, but portable radios continued to rely on batteries.

The batteries that most people used in their homes from the 1930s through the 1950s were the familiar C or D cells that we still sometimes use for flashlights—in fact we still call these “flashlight batteries.” These batteries have to be changed often, and if “dead,” can leak chemicals.

In the 1950s after engineers at Bell Laboratories invented the transistor, new kinds of battery-operated electronic devices began to appear. The transistor was a replacement for the vacuum tube, which was used in all electronic circuits prior to the invention of the transistor. The transistor was much smaller than the vacuum tube and consumed very little power, making it ideal for things like portable radios. Soon, portable electronics took off, and people were using battery-powered radios, phonographs, televisions, and tape players. Transistors needed 6 to 9 volts to operate, but most flashlight batteries were only 1.5 volts, so engineers designed a small 9-volt battery just for transistor radios. This new “transistor battery” is still popular today—the small, rectangular type with two round terminals on the top. 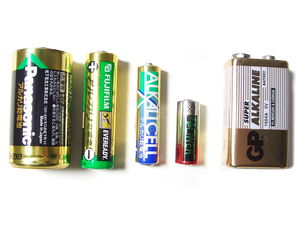 Retrieved from "https://ethw.org/w/index.php?title=Batteries&oldid=119923"
Categories:
This page was last edited on 14 September 2015, at 16:59.
About ETHW
Policies and disclaimers