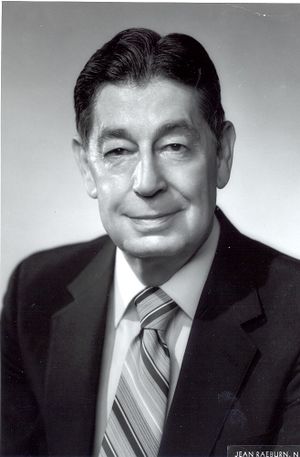 William A. McAdams, a native of Hagerstown, Maryland, was born on February 24, 1918. He was graduated from Washington College, Chestertown, MD, in 1940 and in 1960, his alma mater awarded him the Alumni Citation in Science. Bill joined the E.I. du Pont Company after graduation and joined the General Electric Company in 1946 when General Electric assumed responsibility for the Hanford Atomic Energy Project. Prior to the early 1960s, Bill's experience and activities were primarily in the nuclear energy and radiation protection fields. During this phase of his career, he was assigned, with others, three patents for work with nuclear reactor fuel.

In the early 1960s, his interests were broadened to encompass standards developments in the electrical and electronic fields and to provide guidance and direction to the voluntary standards program at the national and international levels. The scope of his participation is best illustrated by a brief listing of some of the signficant positions he held: he served as Chairman or Vice Chairman of the NEMA Codes and Standards Committee for close to 20 years, he was a member of the Board of Directors of ANSI, he served as President and Board Member of ASTM and he served as Chairman of the Board of Directors of the NFPA. In these roles he strengthened the procedures of the organizations, assuring that all elements of due process were adequately covered by these important standards bodies.

From 1968 to 1974 he served as the President of the U.S. National Committee for the IEC, expanding U.S. IEC participation and activities.

In 1980 following his retirement as Manager of the General Electric Company's Corporate Industry Standards Staff, he was elected to the Presidency of the IEC. This position puts him in direct contact with electrical industry standardization in the 44 member countries of the IEC and expanded his destinations to include Indonesia, China, Brazil, New Zealand, Australia and India.

Among his awards and honors are: The GE Centennial Anniversary Award for outstanding contribution to the Company; the Leo B. Moore Medal of the Standards Engineers Society; Fellow of IEEE; Special Award for International Standards and the Standards Medal of ANSI and the James H. McGraw Manufacturers Medal for Electrical Men.