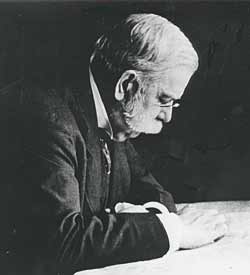 Westinghouse Electric Corporation was one of the driving forces behind electrical engineering progress throughout the late 19th and 20th centuries. From its landmark triumph over Edison in the War of Currents, to its expansion into appliances radio and television receivers and broadcasting, nuclear power, transportation and finance, Westinghouse was a giant in the electric industry.

Company founder George Westinghouse Jr. was born on October 6th, 1846 in Central Bridge, NY to George and Emeline Westinghouse who owned a machine shop. At the age of 15, Westinghouse enrolled in the New York National Guard at the outbreak of the Civil War, and served with the New York Cavalry in 1863. After the war, he enrolled in Union College, where he dropped out after a couple of months.

Much like his father, Westinghouse had an affinity for machinery, which he applied to invention. He invented a rotary steam engine during his brief stint at Union, and after dropping out he worked at his father’s machine shop. As a machinist, Westinghouse worked largely on railroad parts. In 1867 he invented a car replacer, used in guiding derailed cars onto the tracks, and a reversible frog, which aids in the switching of tracks. His first major success was in 1868 with a railroad braking system based on compressed air. After being awarded a patent in 1872, he formed the Westinghouse Air Brake Company to manufacture the brakes, which were universally adopted by the railroad industry.

Westinghouse’s success led him to found the Union Switch and Signal Company in 1881. His interest in railroads spread to the distribution of gas, and later power distribution. Edison’s DC Pearl Street Station opened in 1882, and Westinghouse thought that due to the need for large currents over long distances and the potential for numerous power outages, direct current (DC) transmission was too inefficient to be scaled to a large size. Nikola Tesla had a public falling out with Edison in 1886, and was contracted by Westinghouse who obtained the rights for many of his patents. Tesla had developed an alternating current (AC) system for distribution which allows voltage to be stepped up and down by transformers. Practical transformers were manufactured by Lucien Gaulard as early as 1881. With William Stanley and Franklin Pope, George Westinghouse reformed Gaulard’s transformer design, and in 1886 they installed the first AC power system in Great Barrington, MA.

In 1886 the Westinghouse Electric & Manufacturing Company was formed, which was renamed the Westinghouse Electric Corporation in 1889. While Edison claimed that AC was too dangerous to be implemented for commercial use and would kill humans instantly, Westinghouse’s AC distribution methods ultimately prevailed. The Ames Hydroelectric Generating Plant in 1890 was the first commercial system to generate AC current, and the Niagara Falls Adams Power Plant built in 1895 sent power 20 miles away to Buffalo. By this time, General Electric began producing AC equipment, signaling Westinghouse’s victory in the War of Currents.

Westinghouse boasted 50,000 employees by 1900, and established a formal research and development department in 1906. While the company was expanding, it would experience internal financial difficulties. During the Panic of 1907, the Board of Directors forced George Westinghouse to take a six month leave of absence. Westinghouse officially retired in 1909 and died several years later in 1914. 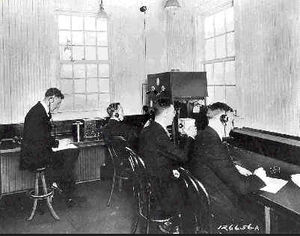 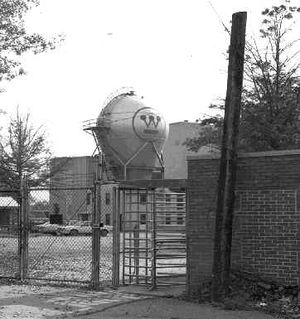 Much like the rest of the nation’s businesses, Westinghouse’s profits throughout the 1920s came to an end with the stock market crash and the Great Depression. The company operated at a loss until 1935, when it declared a profit of $11 million. Even in financially difficult times Westinghouse continued to expand into new areas of electrical technology. The Westinghouse Atom Smasher, constructed in 1937, was the first large-scale program in nuclear physics. Towards the outbreak of World War II, Westinghouse had completely recovered from the depression and was experiencing record profits. 1940 was the company’s most successful year to date, and sales would rapidly increase during the war, increasing from $239 million in 1940 to $835 million in 1944. The company reached one billion dollars in sales in 1950.

Westinghouse continued to invest in nuclear power, and constructed the first civilian nuclear power plant at Shippingport, Pennsylvania in 1957. As appliances sales decreased in the early 1970s, Westinghouse sold its major appliances to White Consolidated, and invested much of its capital into nuclear power. In 1975, the prices for uranium skyrocketed, reaching $40 per pound, an eightfold increase. Reneging on its agreements to supply fuel to their utility customers, Westinghouse was sued by 27 utility companies and faced potential liabilities of more than two billion dollars. A settlement was reached in 1979, where Westinghouse would supply utilities with discounted parts, engineering and other services. However, just after the lawsuit was settled, the Three Mile Island accident occurred, greatly decreasing orders for nuclear power plants.

With the decline in Westinghouse’s nuclear energy business, the corporation looked to expand into other areas during the 1980s. The cable company Teleprompter was purchased in 1980 for $646 million, effectively doubling the size of Westinghouse’s broadcasting operations. Teleprompter was renamed Group W Cable, and this acquisition was not without its problems. Notorious for poor picture quality and unreliable transmission, Westinghouse invested more than $800 million into improving the transmission and picture quality of Group W Cable. The investment proved short lived, as the cable operation would be sold for $2 billion in 1987.

In attempt to revitalize the corporation, CEO Michael Jordan brought in numerous consultants who recommended layoffs that greatly decreased morale. Recognizing the potential in broadcasting, Westinghouse made further acquisitions in that area and purchased CBS in 1995. Shortly after, Westinghouse purchased Infinity broadcasting, TNN, CMT, American Radio Systems, and rights to NFL broadcasting. These investments cost the company over fifteen billion dollars. To recoup its costs, Westinghouse sold many other operations. Siemens purchased non-nuclear power generation, while other firms bought the defense electronics, Knoll Office Furniture, Thermoking, and residential security. With little remaining of the company aside from its broadcasting, Westinghouse renamed itself CBS Corporation in 1997.

Though this historic company ceased to exist in its original form in 1997, the name still lives on. The CBS Corporation created the Westinghouse Licensing Corporation subsidiary in 1998 to manage its historic brand. That year CBS Corporation also sold off its nuclear power generation to British Nuclear Fuels Limited, which in turn sold the business in Toshiba in 2006. The company is now operated under Toshiba as Westinghouse Electric Company LLC, headquartered in Cranberry Township, PA, and 126 years later carries on George Westinghouse’s legacy.