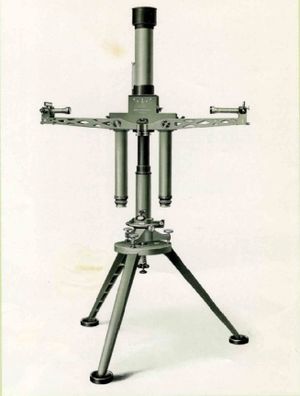 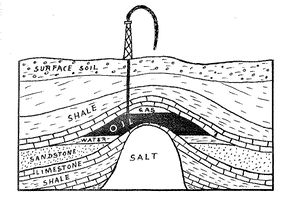 Sketch of the typical salt dome pocket where petroleum is trapped. Torsion balances are very effective in detecting such structures. 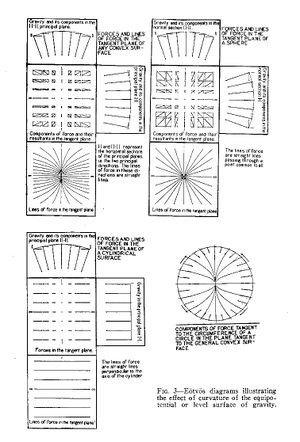 Early torsion balance prototypes were conceived in the late 1880s by the Hungarian physicist Loránd Eötvös (1848-1919)[1]. In 1900, the instrument won the Grand Prix at the Universal Exposition in Paris[2] and over the next fifteen years, Eötvös continued to develop a torsion balance for use in the field, where it could measure the different gravitational pull of deep geological structures.

Gravity has been long believed to vary with the density of the earth’s crust, but only in the 1910s were instruments designed to be sensitive and precise enough to register the slight variations and record the characteristics of the underlying strata. The torsion balance in the 1920s became the principle instrument employed to locate the salt domes that very often are associated with petroleum deposits. Variations in local gravity had three different types of causes: the shape of the earth; the presence of topographic features, that is, how surface masses were distributed in the vicinity of the instrument; and the distribution of minerals of different specific gravity under the surface. In the field, a torsion balance allowed geophysicists to measure the flattening of the earth and to test the theory of isostasy, always as a relative measurement linked to a measurement of absolute gravity at a key geodetic observatory, such as Potsdam or Greenwich. Shortly after the early successful applications, the quest to learn how to better use the instrument arose due to its reputed value to the petroleum industry.

Petroleum accumulates in traps formed by wrinkling the strata beneath the surface of the ground. In the Gulf Coast regions of Texas and Louisiana,[3] the salt domes which have been investigated since the early 1920s by mean of a torsion balance by the team of geologists from the Amerada Oil Company led by Everette Lee DeGolyer (1886-1956)[4] have been frequently associated with petroleum, found on the rims of these domes. This particularly favourable condition greatly helped the technology to develop and refine the functionality of torsion balances, and formed the best practice to record the data. There is no affinity between oil and salt, but the salt domes, pushing up from below, raise the strata and form convenient places for the oil to collect. A mere depression in the rock will not hold oil, for the reason that water, being heavier than oil, will sink beneath it and force it out.

A dome-like pocket, however, holds the oil as in a trap and it cannot escape; the salt raises the strata, and the oil is held in place by the water beneath it. The torsion balance essentially consists of a light aluminium bar suspended horizontally by a fine platinum wire, on which is mounted a small mirror. A small platinum or gold weight is fastened horizontally on one end of the bar, and an equal weight suspended vertically from the other end by a platinum thread about two or three feet long. In some types, two of these balances are used, placed at right angles to each other, so that two sets of readings may be taken at the same time. The balance tends to rotate under the influence of an unequal force of gravity acting on the two platinum weights. This causes a torque or twist in the supporting wire, to which the mirror is attached. The position of a beam of light cast by the mirror is observed by means of a small telescope, or a photographic record can be made. It is evident that this is a very sensitive arrangement.

Changes in the force of gravity of one part per million may be detected. The torsion balance is useful in locating iron ores, lead, f zinc, copper and tin ores, salts, coal, and underground bodies of water, but it is used more for locating oil. The instrument gives no direct indication of oil, but from the observations made, the geologist can work out the location of structures favourable to oil accumulation. If placed directly over the centre of an ore body, the instrument will usually give no indication of its presence, but if moved to the edge, the pull will be greater on one weight than on the other, and by moving it about and taking repeated readings, the area of the mineral body may be determined.

The complete outfit is somewhat bulky and hard to transport. The small version of the balance fully mounted to the ground was 1600mm in height with a weight of 31 kilos, as the balance must be well protected from disturbing influences, such as moisture, air currents, temperature changes. An elaborate provision is made for recording the indications and only trained geologists can successfully use torsion balances.