Difference between revisions of "Thelma Estrin" 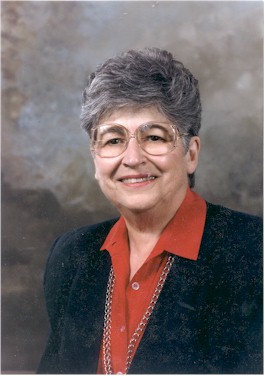 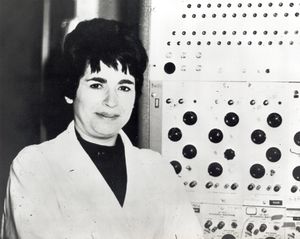 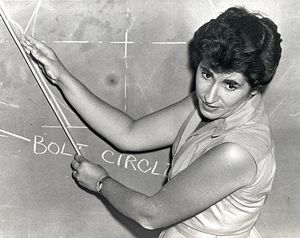 Thelma Estrin, a 1977 IEEE Life Fellow "for contributions to the design and application of computer systems for neurophysiological and brain research," is a pioneer in the field of biomedical engineering and as the IEEE's first female vice president.

Thelma was born in New York City, an only child who was destined to attend college and attain greater achievements. While other girls in school took commercial courses, she pursued academic courses and prepared to go to college. She attended City College of New York (CCNY) in 1941 where she met her husband Gerald Estrin. A year later, in 1942, she took a three month course at Stevens Institute of Technology for engineering assistants. She worked for two years at the Radio Receptor Company. In 1946 she and Jerry moved to Madison, Wisconsin, to pursue undergraduate electrical engineering degrees at the University of Wisconsin. Through a great deal of hard work and long days, Thelma Estrin received her B.S., M.S. and Ph.D. in 1948, 1949 and 1951, respectively. Jerry received an offer to join John von Neumann's computer project at the Institute for Advanced Study and they moved to Princeton, NJ. Thelma was determined to maintain her own career and was hired at the Electroencephalography Department of the Neurological Institute of Columbia Presbyterian Hospital (New York) in November 1951.

Thelma and Jerry spent fifteen months in Israel working on the WEIZAC (WEIZmann Automatic Computer). This became the first electronic computer in the Near East, and is now an IEEE Mielstone in Electrical and Computer Engineering (in the 1980s, the WEIZAC team was interviewed for the Computer Pioneers Project).

In 1956, Jerry accepted an offer by UCLA as an associate professor in the School of Engineering and Applied Science. During this time Thelma taught at Valley College, a junior college in Los Angeles, and did some consulting work.

In 1960, Thelma joined the Brain Research Institute (BRI) and in 1970 became the Director of its Data Processing Laboratory. As Director she provided computer support for a variety of research projects and helped dozens of researchers make use of computers. Thelma was an early champion of medical informatics, the application of computers to medical research and treatment, in all its branches. In 1980 Thelma became a professor in residence in the Computer Science Department of the School of Engineering and Applied Science at UCLA. She retired in July 1991 at the age of sixty-seven.

Thelma has been an active IEEE volunteer, serving as an officer of the IEEE Engineering in Medicine and Biology Society and on the Technical Activities Board, and she was the first woman to be elected to the IEEE Board of Directors. In 1982 she served as executive vice president of IEEE. She has received many honors from the Institute, including the Haradan Pratt Award in 1991.

New Applications of the Computer: Thelma Estrin and Biomedical Engineering

The Computer Pioneers: Weizmann Institute Video Oral History - an multipart interview with the WEIZAC development team including Estrin and many others