Difference between revisions of "Superinsulators" 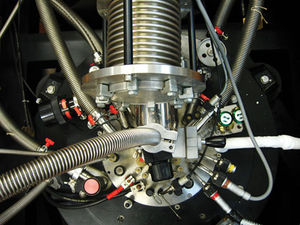 A superinsulator is a material that at low temperatures (and possible combinations of other conditions) has a near infinite resistance. The superinsulating state has many parallels to the superconducting state, and can be destroyed (in a sudden phase transition) by increased temperature, magnetic fields and voltage.

The superinsulating state was first observed on 7 April 2008 by American scientist Valerii Vinokur and Russian scientist Tatyana Baturina at Department of Energy's Argonne National Laboratory in collaboration with several European institutions. It occurred in a titanium nitride film.

This discovery opens new directions of inquiry in condensed matter physics and breaks ground for a new generation of microelectronics.

The IEEE has a Society closely aligned here.