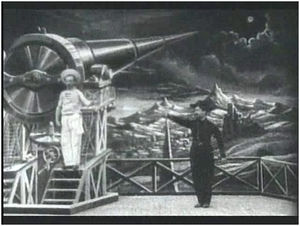 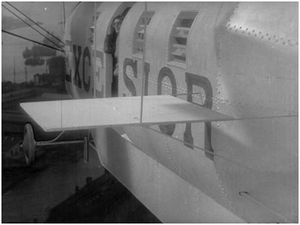 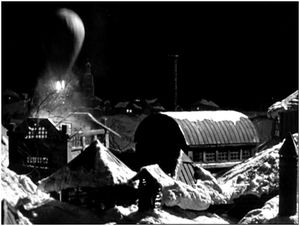 Launching of the egg-like craft in Aelita 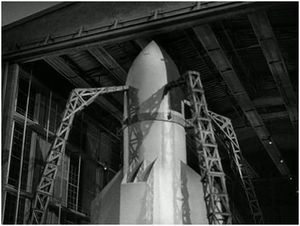 This article was initially published in Today's Engineer on September 2011

Space exploration has captivated audiences through fiction for nearly 150 years. Beginning with Jules Verne’s 1865 novel From the Earth to the Moon, stories revolving around spaceflight have enjoyed great success in print, which carried over into the motion picture around the turn of the century. Looking at these films with our current scientific knowledge, spaceflight’s earliest depictions are wildly inaccurate and largely based in fantasy rather than hard science. As scientists and engineers gained more of an understanding of the world around them, the film industry also mirrored these developments.By the 1920s, depictions of spaceflight were no longer completely implausible, and in many ways predicted the use of rocketry and the subsequent piloted missions to space.

Le Voyage dans la lune (A Trip to the Moon, 1902, France), is the first film to deal with space travel, and arguably the first completely surviving science fiction film. Directed by extremely prolific, influential and diverse French filmmaker Georges Méliès, the film is loosely based on Verne’s From Earth to the Moon and H.G. Wells’ “The First Men in the Moon.” Using pioneering editing and special effects techniques, the film follows a group of astronomers who travel to the moon via a giant bullet-shaped craft, shot out of a massive cannon. The astronomers encounter several strange situations, and are eventually chased off of the moon by its inhabitants, where they fall off the moon through space, landing back on Earth. With a short run time of 14 minutes, the film eschews scientific accuracy for surreal scenes and fantastical atmosphere. The idea of using a cannon-like mechanism to shoot a projectile at a celestial body to transport its passengers was popular in both the works of Jules Verne and H.G. Wells, but was later deemed implausible by Konstantin Tsiolkovsky’s 1903 paper "The Exploration of Cosmic Space by Means of Reaction Devices." This was the first serious work which demonstrated the possibility of spaceflight, and outlined many foundational principles of rocketry. It also noted that cannons used for spaceflight launches would be impossible to construct due the fact that the extreme acceleration would instantly kill any passengers on board. Unfortunately, it was initially not widely read outside Russia.

Himmelskibet (A Trip to Mars, 1918, Denmark), is a very different film than Le Voyage dans la lune. With a runtime of 81 minutes, the film has time to develop characters and a more complex plot, rather than focus on short, surreal scenes. The film shows an expedition to Mars in a craft called the Excelsior, which while not a launched projectile, is no more feasible than Méliès’ depiction. In the Excelsior, the crew arrive safely to Mars (after a subplot involving a mutiny), and encounter an intelligent, peaceful civilization which rejects all concepts of violence. What appears to be a propeller driven bi-plane, the Excelsior resembles a World War I aircraft much more closely than any contemporary theories of rocketry, yet manages to fly through vacuum without any difficulties. The Excelsior’s design draws inspiration from the principles of the Wright Brothers’ famous 1903 flight, a ship with such a design would only be suitable for flight on Earth, and would be unable to escape the atmosphere.

Aelita (1924, USSR) is the first science fiction film from the Soviet Union and primarily deals with Bolshevik themes. Based very loosely on the 1923 novel by Alexei Tolstoy, the film focuses on Los, an engineer in Moscow. He receives strange radio signals, and subsequently visions of Aelita, the daughter of the leader of a repressive totalitarian state on Mars, who observes Earth from a telescope. Los is compelled by the visions of Aelita to construct a craft and fly to Mars. While neither the film nor the novel focus too much on the details of the technology behind the craft, Los designs an egg-shaped ship built upon principles of rocketry, marking rocketry’s first appearance in film. The novel and the film both share the same ideas of an engineer flying to Mars and being involved in the resulting Martian Bolshevik revolution which spreads from human contact, but they handle the plot elements in completely different ways, each with different underlying messages. While popular upon its initial release, the film was later criticized within the Soviet Union for focusing more on the technical aspects of the sets and special effects, rather than espousing Bolshevik ideology. Aelita’s production company, Mezhrabpom, was accused of making an “export” film, designed to make more money with Western audiences, rather than be ideologically consistent with Soviet principles. Regardless of Mezhrabpom’s intentions, Aelita’s constructivist sets, ideas of spaceflight, and treatment of philosophical issues were extremely influential for later science fiction film makers, and its influence can be felt in later genre classics such as Fritz Lang’s Metropolis.

Frau im Mond (Woman in the Moon, 1929, Germany), was by far the most realistic depiction of spaceflight in film at the time. Fritz Lang’s previous science fiction film, Metropolis, is highly regarded as one of the best films of the genre, both by audiences in 1927 and 2011. Frau im Mond’s plot revolves around aerospace engineers Wolf Helius and Hans Windegger who are approached by an aging astronomer, Professor Manfeldt, who previously was shunned by the scientific community for his theory that there is more gold in the mountains of the moon than there is on earth. These three scientists, later joined by Helius’ assistant Friede, and corrupt businessman Turner, embark on an expedition to the moon to explore Manfeldt’s theory. To ensure scientific accuracy for the spaceflight scenes, Fritz Lang actively collected all published literature on space travel at the time, and was so impressed by the possibilities of piloted spaceflight in Hermann Oberth’s By Rocket to Interplanetary Space that he commissioned him to work as a scientific advisor on the film. Also recruited by Lang was Willy Ley, a young scientist who was also influenced by Oberth’s paper. Under the guidance of both Oberth and Ley, Frau im Mond shows realistic scenes involving multistage rockets and weightlessness, which were praised for their accuracy by contemporary critics. While the film was not as well received as Metropolis, Frau im Mond was very influential in the public eye and the scientific community; the Gestapo deemed the launching scenes and production models to be too realistic that they pulled the film from distribution and seized the production model rockets in 1936. Despite this setback, the film was an inspiration to the V-2 team, and the first successful launch of the V-2 bore the Frau im Mond logo at its base.

The 1942 V-2 launch pioneered the way for the postwar space race of the 1950s and 1960s. Sputnik, the first satellite was launched in 1957, Yuri Gagarin’s historic flight would come in April of 1961, and the first manned mission to the Moon touched down on its surface on July 20th, 1969, three months before the 40th anniversary of Frau im Mond’s premiere. In the past 100 years, our society has seen spaceflight transformed from science fiction fantasy to reality; the Space Shuttle was one of NASA’s most successful programs and operated for thirty years before being retired in July. The programs’ 133 successful missions gave us a much greater understanding of our universe, and as NASA’s policy shifts to developing heavy-lift rockets for piloted missions beyond the moon, it is highly possible that today’s science fiction fantasies will become next century’s reality.