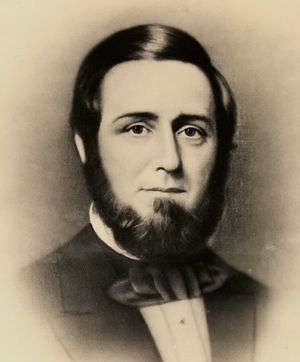 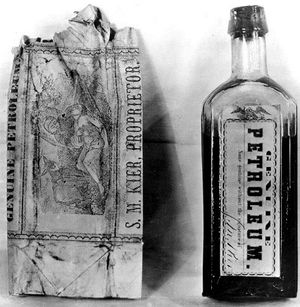 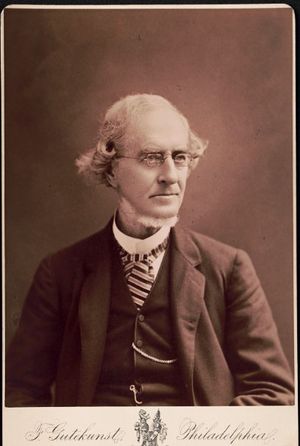 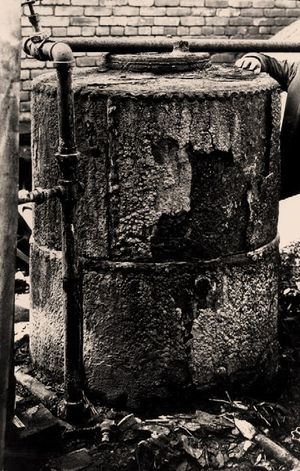 Samuel Martin Kier, was born in Pennsylvania in Indiana County in 1813 and later established in Pittsburg by 1834, was one of the little known pioneers that significantly contributed to the development of the early petroleum industry in the United States. His commitment and achievements in producing, refining, and trading petroleum during the 1840s-1850s stand out among the most important contributions (e.g. Young in Scotland; Gesner in Canada/USA; Łukasiewicz in Poland) that join the stationary petroleum system (antiquity-1850s) to the modern petroleum industry (1860s-present), providing the momentum that ignited the Pennsylvanian petroleum boom and, subsequently, the beginning of the global petroleum system.

In the 1830s, the family of Samuel Kier was involved in several businesses,[1] including the salt produced from brine-wells. In 1837, they leased lands in the vicinity of Tarentum, River Allegheny region, near Pittsburg, and known for the richness of salt wells. The region was also notorious for the pernicious infiltration of petroleum, called at the time also Carbon Oil, a popular rather than scientific term that is revelatory about the relatively poor knowledge on the origin and deposition of petroleum in the subsoil, that affected the quality and the value of the salt extracted. Keir's family's wells started to yield petroleum since 1838, and the oil the Kiers were collecting could be skimmed from the water and used to light the works on the well at night, but the flame produced was smelly and release unpleasant smoke, as it was burnt raw, not refined.

However, Kier was aware about another possible utilization of the unwanted liquid: petroleum as medication. He found out that the same kind of petroleum, coming from the salt wells from close regions, was sold as a medicinal tonic under the brand American Oil. By in 1848, Samuel Kier was selling Pittsburgh the bottled petroleum in his shop into half-pint flasks for fifty cents each.

The demand soon arose and Kier took a step further towards the modern petroleum business: the increasing need for petroleum to be bottled persuaded him to pump out the liquid using the same mechanical, steam powered, pumps initially conceived to rise brine waters. Kier was probably not the first to pump out a well to produce petroleum, but his experience is the one that left the print and inspired practice of petroleum well production by means of machines.

In 1852, the Kier medical product lost its appeal on the market, but he had been seeking additional uses since 1849 for the petroleum coming from the family brine wells. He was aware of the fact that only a few years earlier in 1845, his neighbor and competitor was selling the petroleum coming from his brine wells to a factory that started to blend it with sperm oil, good quality whale oils produced from the brain matter of the cetaceous, to obtain good lubricants for their machineries. This could is possibly the first commercial, non-medicinal, application of petroleum in the United States. However, the “petroleum industry” was not yet established, since the product was just a mixture made of unrefined petroleum. Additionally, oil as a lubricant mixed with other oils was known in Europe, and there is no actual evidence that the business lasted long or influenced other players. Indeed, Kier did not pursue that same venue but rather decided to explore the way of the illumination. He sought for advice in Philadelphia where the chemist and Professor James Curtis Booth (1810-1888)[2] analyzed some petroleum samples supplied from Kier.

Booth advised him that with an appropriate lamp the petroleum could be used as illuminating agent, but overall, it should first be distilled to get a better result and to exploit the raw material qualities best. Booth also provided Kier with a drawing of a basic distillation apparatus. Between 1849 and 1850, Kier started experimenting with distillation. He implemented the first attempts to process liquid petroleum as oil lamp fuel for large scale production in the United States.

The modern industrial refining began ten years later, but Kier's experiments represented the beginnings of the processes of trial and error that preceded the beginning of the modern lamp fuel refining technology, detailed in the 1855 pamphlet of Benjamin Silliman, Jr. They confirmed the idea by which the refining was the only viable way to pursue in order to make of petroleum a commercially valuable mineral, and the need for specific and customized lamps. Kier in fact conceived, following the thoughtful advice of Booth, the idea to design a lamp that could burn something more than the usual vegetal and animal fats-derived oils.

Kier’s distillation experiments lasted more than one year when eventually in 1851 he started to sell his Carbon Oil lamp fuel, which burned with little smoke, odor, a bright flame, and leaving just minor residuum in the lamp. It was sold for $1.50 per gallon, hence less expensive than the spermaceti oil, the best oil available at the time but also very pricy and not accessible to the masses. In Pittsburgh, on the corner of Seventh Avenue and Grant Street, together with his firm John T. Kirkpatrick, Samuel Kier established the first liquid petroleum refinery in the United States starting with a small one or two barrel production, and by 1854, he acquired a larger one with a working capacity of 5 barrels. Beside the development of the refinery, Kier achieved the plan to design and produce a burner for illumination that would work properly with his carbon oil.

Kier proved to be a great businessman, a self-taught technician, and a forerunner in the illumination sector, but he made a mistake when he neglected to patent either his distillation process or new lamp design. In the light of what was going to happen in the following few years to come he could have probably become a tycoon of the illumination market. Regardless, he continued his production and trade of petroleum as medicine, Carbon Oil, and lamps, quite successfully, even after the Pennsylvanian oil boom boosted over the U.S. boundaries.

Samuel Kier developed the first commercial refinery in the United States which used liquid petroleum as feedstock. He has the distinction to have demonstrated that the key of the success of petroleum was in the refining process, and petroleum as illuminant could have been optimized to take over the completion, whether used in specifically designed lamps. The people of Pittsburgh became the first in the United States to use distilled petroleum for illumination. The same city and the surrounding villages between 1859 and 1865 became the core of the newborn petroleum industrial refining and provided the first bulk of refined oil shipped to Europe and then the other continents after 1861.

Henry, John Tailor. The early and later history of petroleum : with authentic facts in regard to its development in western Pennsylvania : the oil fields of Europe and America, gas wells, spiritual wells, oil well shafts, petroleum products ... the Parkers' and Butler County oil fields : also, life sketches of pioneer and prominent operators, with the refining capacity of the United States. Philadelphia: J.B. Rodgers Co., 1873.

Neuburger, Henry and Noalhat, Henri. Technology of petroleum; the oil fields of the world, their history, geography, and geology; annual production, prospection and development; oil-well drilling, explosives and the use of the “torpedo”, transportation of petroleum by sea and by land, the storage of petroleum, technical data-tables, formulæ, problems, etc. London, Scott, Greenwood and Company, 1901.