Difference between revisions of "Richard Damon" 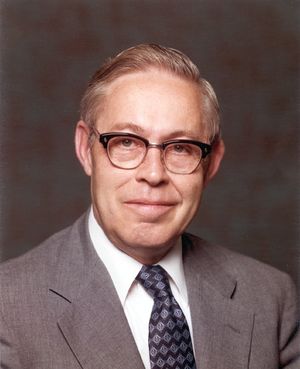 Richard Damon was raised in the relatively rural community of Concord, Massachusetts. As a boy he developed interests in the sciences, especially astronomy, chemistry and electronics and, at age eleven, formed a society of science with his friends. He also demonstrated leadership skills when he was young; he was an Eagle Scout and president of his class in High School. He won a full scholarship to Harvard where he initially studied chemistry but switched his major to physics after the attack on Pearl Harbor. During World War II, he served in the US Navy where he was given the task of installing shipboard sonar.

After the war ended, Damon returned to Harvard for graduate school. His thesis studied spin-wave instability and demagnetizing fields. After earning his PhD, Damon worked at General Electric Research Laboratory during the 1950s and Microwave Associates in the 1960s. Damon earned a number of patents, taught a graduate class in solid state electronics at Harvard, and published several articles during these years.

Later in his career, he joined Sperry Rand Research Center where he became director of the Applied Physics Laboratory. He led research on semiconductor devices, magnetic disks, fiber optics and other subjects. Before he retired as corporate director of technology, he oversaw $500 million in Research and Development programs yearly. Even after his retirement he kept active, serving as director of Matec Corporation and as an adjunct professor at Gordon Institute.

Damon served as IEEE president in 1981. He placed great importance of raising the public profile of the engineering profession and encouraged engineers to go beyond traditional engineering roles by seeking positions in business, industry and government. He was a fellow of the American Physical Society and the AAAS and was elected to the National Academy of Engineering in 1989.

Damon was married to Anna and had three children. His interest in the history of his own family is revealed by his real estate actions. In 1963, he purchased the home that had been built for his grandparents upon their 1884 wedding. In 1977 he renovated Damon Mill in Concord, a building which had been constructed by his great grandfather in the 1860s.