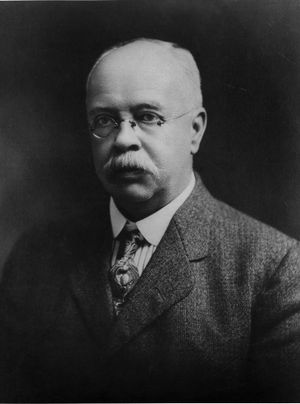 Ralph Wainwright Pope, was born at Great Barrington, MA in August 16th, 1844 to Ebenezer and Electa Leonard (Wainwright) Pope, and was the younger brother of Franklin Pope. He received his education in local schools, Amherst Academy, and the North Amherst district school, but ill health caused him to leave school at the age of thirteen.

In addition to his other position, he was engaged in 1867 as assistant editor of the "Telegrapher". After filling the position of deputy superintendent with the Gold and Stock Telegraph Company since 1880, he was in 1882 appointed manager of the Union Electric Manufacturing Company, New York. He became associate editor of "The Electrician and Electrical Engineer" in 1884.

In 1890, he founded the monthly "Electric Power", and in 1892 he became editor, for electrical terms, of the Standard Dictionary.

Mr. Pope had been elected Secretary of the American Institute of Electrical Engineers in 1885, the year after it was organized, in 1887 agreed to devote nearly his entire time to the duties of this office. He continued in this position until he decided, in 1911, to retire from active service, and was appointed Honorary Secretary for life.

In a report prepared by a committee on resolutions appointed by the president of the Institute under authority of the Board of Directors, Mr. Pope's faithful and loyal service to the Institute was officially recognized. During his tenure of office, this organization had developed from a small group to a society with several thousand members. His enthusiasm for the development of local meetings was primarily responsible for the inauguration, in 1902, of plans which resulted, during the next thirty years, in the organization of 60 sections and 109 student branches, and which have contributed greatly to the continued progress of the Institute.