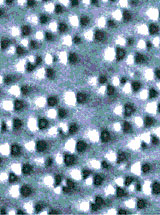 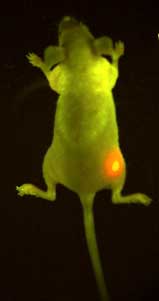 In the mid-1980s, scientists first noticed the strange behavior of confined semiconductor atoms when researchers stimulated fairly large samples of porous silicon with a laser and it began to emit red light. Before, a diode connected to a source of electricity was needed to make silicon emit light, so this was a new phenomenon. Engineers reasoned that the effect could also be achieved by making much smaller pieces of semiconductor. The light emitting properties of these pieces of silicon were improved by using semiconductors such as cadmium selenide and by encasing the semiconductors in other materials such as zinc sulphite. They discovered that with smaller pieces and new materials, other colors would be emitted. Soon, red, green, and blue lights could all be made with quantum dots. In fact, by changing the size of the dots, light of any shade or color could be produced. By encapsulating millions of quantum dots in thin plastic sheets, engineers proposed making new types of displays for computers and televisions.

Quantum dots—one of the latest applications of nanotechnology—are tiny semiconductor devices with unique properties that scientists are currently exploring.

Combining red, blue, and green creates white light. One day millions of quantum dots may be used as an indoor or outdoor lighting source. They may even be applied to fabric or mixed into paint and used to light rooms or objects. Biochemists have also been looking for ways to use quantum dots inside the human body. For many years, doctors have used dyes to help detect cancer and other diseases. They use special dyes that become concentrated in certain parts of the bodies, such as cancerous areas. Then, when the dots are stimulated into emitting light, that light can be detected outside the body and turned into a detailed image of the tissue. Because quantum dots emit light at a particular frequency, dots of several different sizes could be used simultaneously to image different parts of the body. However, a major obstacle has been finding a way to encapsulate the quantum dots, to protect the dots (and the body) from damage, and to allow them to automatically attach themselves to the proper parts of the body. Only very recently have scientists found ways to do this. Today there are numerous researchers looking for ways to put quantum dots inside casings made of chemicals that protect the dots while inside the body. Then bits of DNA are attached to the casings to allow the dots to become attached to particular kinds of cells.

Others have proposed using quantum dots as microscopic replacements for today’s transistors. The dots can act as tiny, optical switches, that when made into optical integrated circuits could be used to handle Internet traffic. Such devices might be able to increase the speed of the Internet by about a million times. One key problem is that to make a complicated integrated circuit out of quantum dots, it will be necessary to find nano-scale “wires” to connect them together. Researchers at the Lawrence Livermore Laboratory have been working on techniques to use string-shaped organic molecules, capable of conducting electricity, to link the quantum dots into functional electric circuits. Quantum dots are still largely experimental, but scientists and engineers around the world are working feverishly to turn them into practical technologies.