The heart is a four-chambered muscle that pumps blood through your body. Normally the contraction of heart muscle is well regulated. Muscle fibers surrounding a chamber contract in unison (all at the same time) and the different chambers work together to move the blood. The electrical impulses that bring about this coordination sometimes, however, fail. It is possible to keep a person alive and even restore him to normal activity by providing correct impulses from some artificial source. This is what a cardiac pacemaker does.

The first pacemakers were large devices that stimulated the heart through large electrodes (metal pieces for electrical contact) placed on the chest. In 1952 Paul M. Zoll, working with engineers of the Electrodyne Company, developed the first successful external pacemaker. Because large impulses were required, use of the device caused pain and burns. In 1957 a somewhat better device was created, which was implanted in the chest and used smaller impulses. The obvious drawback was that the chest needed to be opened and wires run to an external pulse generator.

The first implanted cardiac pacemaker was placed in an experimental animal on 7 May 1958 by Wilson Greatbatch and the cardiologist W.M. Chardack. In 1958 and 1959 Greatbatch developed a fully implantable pacemaker (that is, it could be placed on top of the heart). Six years later Greatbatch improved on the design by making a so-called inhibited demand pacemaker. It provided impulses to the heart only when they were needed.

Earl Bakken was also working on a battery-powered pulse generator for cardiac pacing beginning in December 1957. His device was tested successfully on a human patient in the spring of 1958.  It used transistors and ran on batteries and was used on patients whose hearts failed to begin beating after surgery. The transistor revolutionized electronics in all industries including the medical industry, by allowing things to be made smaller. (Courtesy: Bakken Library and Museum.)


Since then, many further improvements have been made, and today cardiac pacemakers enable millions of people to lead normal lives. 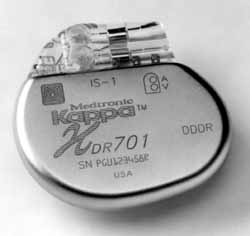