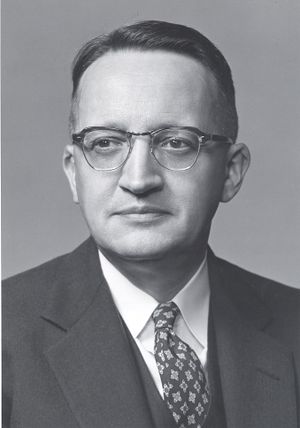 Upon graduation, Hooven went to work for Westinghouse as a member of the newly formed radio engineering staff. There he was assigned as a cub engineer to Charles LeGeyt Fortescue. Once KDKA, Westinghouse’s trailblazing radio station, had established itself, Hooven tried radio sales out of the Westinghouse agent-jobber establishment at Pittsburgh, but soon returned to engineering.

In 1922, Dr. Fortescue sent Hooven to the Public Service Electric Company in Newark where Mr. Rollin Conwell was forming a new transmission engineering office. Here, Hooven was charged with the establishment of a group to explore electric system planning, then a pioneering field. With the onset of the Depression, he became Assistant Transmission and Substation Engineer, spending more time on hardware than previously. During the war, he became head of the electrical division of the engineering department, and after the war, he sponsored the electrical design and construction of the larger generating units and stations then being rushed into service.

Hooven served on the inter-utilities committee which established the Pennsylvania-New Jersey 220 kv Interconnection (now PJM) and other intercompany committees developing load studies, operating communications, river basin studies and plant design. Hooven remained at PSE&G until 1959, serving 48 years in varying assignments for the growing utility. Even after retirement, he continued in the capacity of consulting engineer to PSE&G, and associated electric utilities in New Jersey, especially on problems concerned with the development of natural resources.

For more than ten years, he was a part of the administration of the Joint Development and Research Program of the Bell System and NELA which settled with some finality the controversies which earlier had greatly disturbed relationships between the communication and electric supply utilities. He served the combined industries in developing the joint Principles and Practices as the electric supply system representative on the negotiating committees with the telegraph companies and the railroads. He was one of the joint chairmen of the NEMA-RMA-NELA industry committee on Radio Coordination.

His first Institute papers were presented in 1929, -"Radio Interference" before IRE's Fourth Annual Convention at Washington, D. C. and "Procedures for Load Forecasting" before AIEE in New York. His professional society activities during the twenties, however, were largely confined to the Engineering National Section of the National Electric Light Association (now Edison Electric Institute) where he became chairman of the Radio Interference Committee in 1926, chairman of the Inductive Coordination Committee in 1929, and Secretary of the Power Systems Engineering Committee in 1930.

Hooven was one of the founders of the Power Group of the New York Section of AIEE and, several years later, of the New Jersey Division of that Section. He was also a participant in the formation of the Northern New Jersey Section of IRE. After the war, he became a member of the joint ASME-AIEE Committee on Steam Turbine Generators which sponsored the adoption of standards for new large power generating units.

In the National AIEE organization, his work progressed through the Technical Program Committee, the Publication Committee, and the Planning and Coordination Committee until the mid-1940s when he became a member of the three-man exploratory team which later sponsored the Board of Directors' adoption of the 1946 Ashville Resolution. This resolution reoriented Institute activities, and still carries with it administrative concepts of high import to the successor institute, IEEE.

In 1954, Hooven represented electrical engineering at ASCE's Centennial of Engineering and gave the electrical-historical paper at the Convocation's session on the "Role of the Organized Professions." He became Chairman of the New York Section of AIEE, and later served as AIEE Vice President, a Director, and in 1955, as President.

Hooven was an early proponent of “unity of the profession,” a philosophical position that ultimately triumphed in the merger of the AIEE and the IRE to form the IEEE. At a specially called meeting of the AIEE Board of Directors in San Francisco, he obtained a cautious approval of a unity and merger outline. He served on the Engineers Council for Professional Development for thirteen consecutive years, including two terms as president beginning in 1957. He also served on the Engineers Joint Council. His position on the Joint ECPD-EJC Committee on Survey of the Profession, including his role as chairman for many years, gave him a platform to promote the “unity of the profession” position. Despite his early efforts, the merger would not occur until the early 1960s.

He also served on the Committee on Development of Engineering Faculties in ASEE, the Professional Identity Committee in NSPE, and later as Chairman of the History Committee of IEEE.

Hooven received the IEEE Founders Medal in 1970 "In recognition of many years of creative leadership in the advancement of electric power systems engineering, and for contributions to the community in engineering education and in the effective uses of water resources."