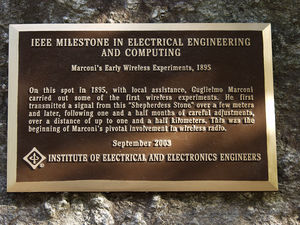 IEEE established the Milestones Program in 1983 in conjunction with the 1984 Centennial Celebration to recognize the achievements of the Century of Giants who formed the profession and technologies represented by IEEE.

Each milestone recognizes a significant achievement that occurred at least twenty-five years ago in an area of technology represented in IEEE and having at least regional impact. To date, more than seventy-five Milestones have been approved and dedicated around the world.

It is a two-step process. You will first have to propose the idea. When you have received the go ahead to make the nomination, you will then go to the nomination box in the lower left hand corner on this page, enter the name of your nomination, and then press New Milestone. Before proceeding any further, please go to the Proposing a Milestone page for more detailed information.