In early 1920, in this building, technicians of the Königs Wusterhausen radio station together with employees from the Telegraphentechnisches Reichsamt, began experiments broadcasting voice and music using an arc transmitter. By late 1920, tests had become successful enough to transmit an instrumental concert on 22 December -- the so-called Christmas concert. This transmission is regarded as the birth of statutorily regulated broadcasting in Germany. 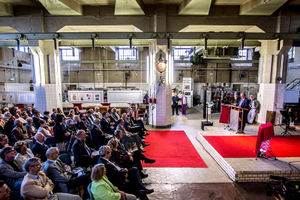 The plaque is mounted inside the museum near the entrance door.

The Christmas concert of the radio station Königs Wusterhausen in the ownership of the “Reichpostministerium” demonstrates the technical opportunity to perform all characteristics of broadcast by transmitting live music, music from gramophone records and an arrangement of a program. This Christmas concert is regarded as the birth of German broadcast.

The specifics of early broadcast in Germany

In January 1920 Dr. Bredow instructed the Main Radio Station Königs Wusterhausen to make test transmissions of voice and music in cooperation with the Telepraphentechnisches Reichsamt (TRA). This would help to solve the technical problems.

Among others a 5 kW arc transmitter manufactured by the company Lorenz was operated on 111.1 kHz (2700 m) during the non-transmission periods of the commercial broadcast. The arc transmitter was upgraded on a trial basis by adding an intermediate circuit and a magnetic amplifier to modulate the transmitter. This improvement resulted in a usable modulation of the transmitter by using a microphone for voice, live music and music from a gramophone. The technical employees in Königs Wusterhausen were able to evaluate and improve the modulated transmissions and the studio conditions by themselves because of their musical background. Moreover they enjoyed playing music.

In December 1920 the tests reached such a level that an instrumental concert of violin, cello and harmonium were able to be transmitted. A concert was announced via radio for the 22 of December. The transmission itself was announced with the phrase: “This is Königs Wusterhausen on wavelength 2700 m. As a sign that the station has attained full age and does no longer serve as guinea pig…” The Christmas concert was arranged by the employees of the Königs Wusterhausen radio station. They received praising reception reports, for instance from Luxembourg, Kiel, Veendam / Netherlands [2], [3], [6], [7]. This Christmas concert is regarded as the birth of German broadcast. For the first time all characteristics of broadcast were performed by transmitting live music, music from gramophone records, voices and an arrangement of a program.

After this first Christmas concert tests were continued. More concerts were arranged, the modulation was tested using telephone lines, a live transmission of the opera “Madam Butterfly” was made from Berlin, and speeches to the parliament “Reichstag” were transmitted. After the technicians constructed their own so-called “concert transmitter” by using discarded components from arc and tube transmitters they began to transmit regular Sunday concerts. These concerts were arranged every Sunday from 11 p.m. to 1 a.m. until January 1926 [1]. On one hand the test transmissions from Königs Wusterhausen showed the technical feasibility to the responsible authorities in German ministries. On the other hand public interest in broadcast was kindled.

The political implementation of a broadcast system in Germany was accompanied and controlled to a large extent by Dr. Hans Bredow. Pressurized by the radio industry and other parties, a system was developed which included the operation of transmitting technology by the Reichspost. The programs were performed by private companies which were controlled by the State. The whole system was financed by the fees of its participants. On this basis the public broadcasting service was officially started in Germany on 29 October 1923.