Difference between revisions of "Milestones:First Transatlantic Transmission of a Television Signal via Satellite, 1962" 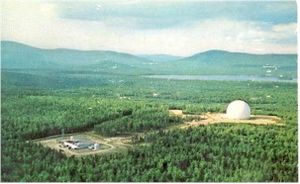 The site of the Andover Earth Station was selected by AT&T in December 1960. The main factors were the topography of the land and the radio interference signal level. Other factors included a location in the Northeast United States to give a short great circle path to Western Europe, it was located close enough to existing transcontinental radio relay television and telephone routes to facilitate interconnection. In addition, the site had to be large enough to accommodate an antenna structure and control building, and provide for expansion, if necessary.1
Land was purchased in January, 1961, and construction of the complex began on 1 May. Building construction was completed and the equipment was installed in February 1962. The Ground Station was operational in the Spring of 1962. AT&T and Bell Labs initiated, funded, constructed and took the leadership to make this project possible.
The Andover Earth Station was equipped with a giant horn antenna, seven stories high and weighed three hundred and forty tons. To protect it from bad weather, a radome made of Dacron covered the antenna. It was one hundred and sixty feet high, two hundred and ten feet wide and weighs thirty tons.

Telstar was launched on 10 July 1962 from the Cape Canaveral Air Force Station, which is located at the Kennedy Space Center, located on Cape Canaveral in Florida, and went into orbit at 4:46am. The engineers at the Andover Earth Station would have to wait fifteen hours for the satellite, traveling at a rate of five miles per second, 3000 miles above the earth to reach within their "view". The engineers successfully sent a signal to Telstar, which amplified it ten billion times and relayed it back to Andover.

Eugene F. O'Neill, Telstar Project Director and IEEE Fellow, oversaw the success of this project at Andover. He noted, in his IEEE oral history, that one of the challenges was pointing an extremely sharp beam very accurately at the satellite. At 7:17pm he announced "We've acquired Telstar!" At 7:31pm an American flag at Andover appeared on the television screen. Then at 7:47pm engineers at Andover received word that the France site, Pleumeur-Bodou, had received the television picture. History had been made.