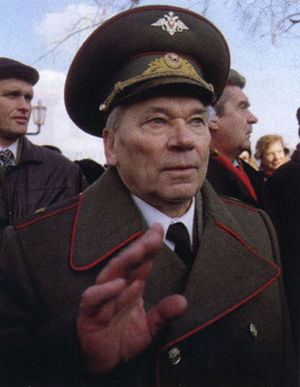 Mikhail Kalashnikov was a renowned Russian weapons designer, engineer, war hero, and general. He is known for developing the AK-47, the most commonly distributed assault rifle in the world. According to Kalashnikov, he was a self-tinkerer who combined innate mechanical skills with the study of weaponry to design arms that achieved battlefield ubiquity. Though Kalashnikov felt guilty later in life for observing how his AK-47 would be used for aggression rather then defense, his weapon became a staple of the Russian military, and he himself became a national figure.[1]

Kalashnikov was born November 10th, 1919 in Kurya, Russia. His family was a group of peasant that belonged to the Kulak class, which led to their deportation by the Stalinist regime in 1930. During the process his family lost all their property, and were forced to move to a village where his father often went hunting. From an early age Kalashnikov was familiar with weapons, as he observed and participated in his father's sport. At the age of six Kalashnikov fell seriously ill, and after recovering he attended school with the intent on studying writing and poetry.[2]

Upon finishing the 9th grade in 1936, with his father's permission, Kalashnikov went to work as a technical clerk in a political department of the 3rd branch of the Turkestan-Siberian Railroad. This did not last long and in 1938 Kalashnikov was called upon for military service. He served in the Kiev Special Military District, Tank Division, where he completed tank drivers training to serve as a tank commander. His Division was soon to be deployed in Striy town. [3]

While serving the military, Kalashnikov designed a tank shot counter and the running time meter for tank engines. These devices demonstrated stable and accurate performance. The commanders noticed and were impressed, and eventually decided to put them into production. Kalashnikov went into battle as a tank commander on the T-34s of the 24th Tank Regiment, the 108th Tank Division stationed in Stryi before the regiment retreated after the Battle of Brody in June 1941. He was wounded in combat in 1941 at the battle of Bryansk in October and remained hospitalized until April of 1942. [4]

During this time at the hospital, he noticed through various conversations with soldiers that they were dissatisfied with the personal sub machine guns they were using in combat. Kalashnikov developed the idea of creating a new rifle for the military. While staying in the hospital he developed an early design for a sub machine rifle. It was initially rejected, but got the attention of higher ranked military officials that saw him as a talented designer.[5]

In 1942, Kalashnikov was assigned to the Central Scientific-development Firing Range for Rifle Firearms as the Chief Artillery Directorate of the Red Army. Following his promotion into the position, in 1944 he designed a gas-operated carbine for the new 7.62x39 mm cartridge to compete in a design competition. The weapon went on to influence the M1 Garand rifle, but lost out to the new Simonov carbine which would eventually be adopted as the SKS. His winning entry in another category, named the "Mikhtim", became the precursor for the development of a family of prototype rifles. In 1947, he designed the AK-47 from components of his previous works. [6]

After winning a design competition, the AK-47 was recommended to the Soviet Army as a possible addition to the military's arsenal. In 1948, a designer was sent to Izhevskiy Motozavod, a plant that was designed to produce a pilot series for military testing. In September of 1949 the AK-47 was adopted as the standard rifle of the Soviet Military. [7]

Over the course of his career, Kalashnikov improved the AK-47's design with the release of the AKM in 1963, a lighter and cheaper to manufacture model which used of a stamped steel receiver. He also developed the general-purpose PK machine gun, using a belt-fed cartridge that intended to provide heavy sustained fire from a tripod mount. The common characteristics of all these weapons were their simple design, ruggedness, and ease of maintenance.[8]

Roughly 100 million AK-47's have been produced since the weapons release. Kalashnikov later expressed regret over how his weapon was being used, stating that "It is painful for me to see when criminal elements of all kinds fire form my weapon." He became seriously religious late in life due to these regrets.[9] He passed away on the 23rd of December at the age of 93. [10]