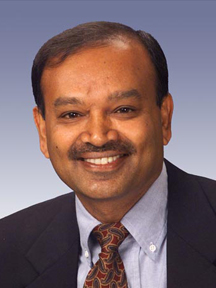 Meyya Meyyappan has spearheaded major advancements in the field of space engineering through his pioneering research and development of nanotechnology applications for aerospace and industry. Dr. Meyyappan is chief scientist for Exploration Technology and until recently was director of the Center for Nanotechnology, NASA Ames Research Center in Moffett Field, Calif., which he helped found in 1997. The Center is considered the strongest and most creative nanotechnology research laboratory of any of the federal labs. A respected author, Dr. Meyyappan has published more than 180 referenced technical papers, 15 books and nine patents. An IEEE Fellow, he is also the recipient of several awards for his work and leadership in nanotechnology, including Presidential Meritorious Award and the Arthur Fleming Award given by the Fleming Foundation and George Washington University. He holds a bachelor’s from Madras University, India; a master’s from Aston University, Birmingham, U.K.; and doctorate from Clarkson University, Potsdam, N.Y.