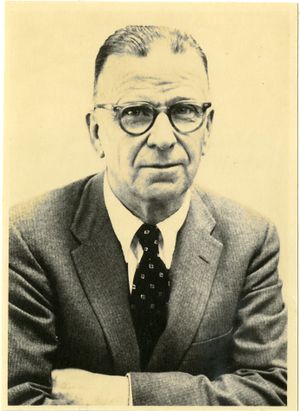 Mervin J . Kelly was born in Princeton, Missouri, February 14, 1894. His father was then a high school principal, and his mother came of a farming family. The Kelly family soon moved to Gallatin, Missouri, where their son acquired his elementary and high school education, graduating as class valedictorian at the age of fifteen.

He graduated in 1914 from the Missouri School of Mines and Metallurgy with honors and a Bachelor of Science degree. For the next two years he taught physics and studied mathematics at the University of Kentucky. In 1915 he married, and the young couple went to the University of Chicago where he, as assistant to Professor R. A. Millikan, participated in the famous "oil drop" experiments for measuring the charge of the electron. He earned his Ph.D. in physics there in 1918.

Dr. Kelly began his professional career with the Engineering Department of the Western Electric Company, which subsequently (1925) was incorporated as the Bell Telephone Laboratories. During the first ten years he worked as a research physicist in the areas of thermionic emission, gaseous discharge phenomena, and electron dynamics. In this period one of the basic problems on which Bell System research effort was concentrated was the electronic vacuum tube which was the key to nationwide and, later, worldwide telephone service. Dr. Kelly and his group produced vacuum tubes of phenomenal stability, reliability, and useful life, for application in telephone voice repeaters. Also, for application in transoceanic radio telephony, he and his group produced water-cooled electron tubes capable of handling high frequencies and great power. These tubes were the forerunners of the powerful tubes now serving in broadcasting and television stations.

From 1928 on, Dr. Kelly's area of technical activities steadily broadened, and he progressed toward ever-widening administrative and executive responsibilities. In 1934 he was appointed Development Director of Transmission Instruments and Electronics and in 1936 Director of Research. When World War II broke, he was placed in charge of the war research and development effort of the Laboratories, comprising radar, sonar, gunfire control, and bombsight projects, and including a vast array of military communication systems. In 1944 he became Executive Vice President of the Laboratories, in 1951 President, and in 1959 Chairman of the Board until his retirement. During this period the Laboratories expanded greatly to handle a vastly increased research and development responsibility for the Government and for the Bell System. It grew to employ over 11,000 persons, of whom approximately one-third are trained scientists and engineers. In addition to physical expansion, the high reputation which this organization has long enjoyed has been much enhanced by the intelligence, foresight, and drive of Dr. Kelly. He was especially outstanding in anticipating and guiding technological advance, and in adapting the Laboratories' organizational structure and work program to it.

Over and above his responsibilities Bell Laboratories, Dr. Kelly has accepted numerous assignments in public service. As examples, he was Vice Chairman of the U.S. Air force Advisory Board from 1950 through 1954, and Chairman in l955. Since 1957 he has served as a member of the Board of Visitors to the Air University at Montgomery, Alabama. He has been on the Naval Research Advisory Committee since 1954, and served as Vice Chairman in 1956. He was advisor to the Atomic Energy Commission on its military research and development program. In 1953, he was Chairman of a committee for the Secretary of Defense to study the problems of continental defense against atomic attack. In 1954, he was appointed a member of the Hoover Commission's Committee on Business Organization of the Department of defense. He is a member-at-large of the Defense Science Board and chairman of a National Academy of Sciences' committee to survey the research and development activities of the Department of Commerce. Since 1952 he has served as a member of the Statutory Visiting Committee of the National Bureau of Standards; and he has served as Chairman since 1954.

In the field of awards, he received the Presidential Certificate of Merit for his time contributions to the national defense. In l953, the Air Force Association awarded him its trophy "for distinguished service to air power in . the field of science." He also holds the Air Force Exceptional Service Award. In 1954, he was awarded the medal of the Industrial Research Institute for his "distinguished leadership in industrial research, joining the mind of the scientist and the hand of the technologist to serve the security and ·well-being of mankind, and for outstanding personal contributions to national security." In 1955, he was awarded the Christopher Columbus International Communication Prize, in 1958 the James Forrestal Medal, in 1959 the Stevens Institute of Technology Honor Award, and in 1960. the John Fritz Medal and the University of Chicago Alumni Medal.

His receipt of AIEE's Award in Telecommunication indeed sets the highest possible standard for the future.