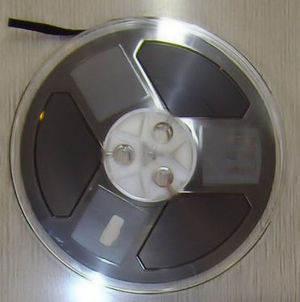 This article was initially published in Today's Engineer on February 2005

The idea of recording and playing back sound by recording a magnetic signal on a conductive medium was first thought of by American Oberlin Smith in 1888, and the first practical device to do so -- using wire as the medium -- was Danish inventor Valdemar Poulsen’s Telegraphone, patented in 1898.

For the next few decades, although work was also carried out in the United States and the United Kingdom, among other places, the Germans led the efforts to improve magnetic recording. In 1928 Fritz Pfleumer developed, and in 1929 patented a magnetic recording tape using oxide bonded to a strip of paper or film. Building upon this, AEG developed the Magnetophone, and improvements in the chemical engineering of polymers allowed its partner BASF to ship the first magnetic tape in 1935-- a foil of cellulose acetate coated with a lacquer of iron oxide bound with additional cellulose acetate. Most developed nations continued to work on magnetic tape for commercial and, with the approach of World War II, military applications.

During the War, the Allies became aware of the German superiority in this technology. As U.S. forces advanced late in the war, a young technician from the Army Signal Corps, John T. “Jack” Mullin, was assigned to capture and analyze enemy radio equipment. He stumbled upon an advanced Magnetophone, and U.S. work soon progressed in this area.

According to one popular story, in 1945, General Dwight D. Eisenhower wanted to record a message to the German people, which he did using captured German tape.

However, the tape had not been completely erased, and Hitler’s voice, so the story goes, could be heard intermittently along with that of Eisenhower. Eisenhower ordered that no more captured tape could be used, and ordered Major John Herbert Orr to use captured German scientists to set up an American tape manufacturing facility.

Afterwards, Orr returned to civilian life in the United States where he went into partnership with Alexander Poniatoff. Their company-- Ampex-- began producing magnetic tape and magnetic recorders. German patent rights on the recorders had been seized by the U.S. Alien Property Custodian.

Meanwhile, Mullin had also returned from the War, and in 1946 demonstrated the advanced Magnetophone to a meeting of the IRE, predecessor to the IEEE. There, according to Mullin's own account, it created quite a sensation. Word got back to Bing Crosby, who was a pioneer in the area of entertainer-as-entrepreneur. With Mullin as a consultant, Crosby began to use the Magnetophone to record his radio programs. Soon Mullin entered an arrangement with Ampex to supply the equipment and recording medium, and the company and the technology took off.

Magnetic tape became a crucial recording medium for the birth of the information age, used for video as well as audio, in formats such as cassette and 8-track, for sound recording in motion pictures (replacing optical sound tracks), and eventually for digital recording, including computer memory.

There were many other manufacturers around the world: 3M in the United States; a reformed BASF in Germany, Philips in the Netherlands; and Sony in Japan. Ampex always remained a leader, and in 1995, Ampex successfully spun off its media division as Quantegy.

Over the past few decades, digital recording has all but completely supplanted analog recording. Various new media, including those that employ lasers, are now more widely used to record digital signals. Although magnetic tape will continue to be used for niche applications, it is no longer as ubiquitous as it once was.