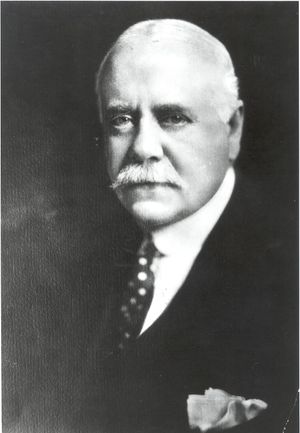 Louis A. Ferguson, AIEE President, 1908 - 1909, recommended the 3 phase a-c system for substations, and has made important contributions to the development of low voltage distribution.

The life of Louis Aloysius Ferguson has been intimately connected with the tremendous growth of the electric light and power industry. When he entered the service of the Chicago Edison Company, now the Commonwealth Edison Company, Chicago, the original Adams Street station of this company with its 4 200-hp non-condensing engines and belted d-c generators was just nearing completion. Today, Mr. Ferguson is vice-president of the company, and its combined generating capacity is over 1,000,000 kw.

Mr. Ferguson was born in Dorchester, Mass., August 19, 1867. In 1888 he graduated from the electrical engineering course at Massachusetts Institute of Technology, Cambridge, with the degree of B.S. From there he went directly to the underground distribution department of the Chicago Edison Company.

In 1890 he was appointed electrical engineer in charge of all electrical engineering and electrical construction work of the company. Three years later he undertook, in addition, the supervision of all soliciting and contract work, in which field he was especially successful in conducting negotiations with large mercantile and industrial establishments. In 1897 he was appointed general superintendent of the Chicago Electric Company and a year later was given the same position in the Commonwealth Edison Company; supervision of the operating departments of the company was added to his duties. In 1902 he was elected second vice-president of both companies, in charge of contracts, operating, construction, and electrical departments. In 1907 he was elected second vice-president of the Commonwealth Edison Company, and since 1914 has been vice-president of this company.

Mr. Ferguson early recommended adoption of the 3-phase a-c system of transmission to substations, with rotary conversion to direct current for general distribution. He has made notable contributions to the development of low voltage distribution. He has kept in close touch with European engineering developments through frequent trips and has applied his findings to the Chicago system. Also, he has much to do with the development of rate structures as used in the United States.

Mr. Ferguson has served the Institute as manager, 1904-07, vice-president 1907-08, and as president. He also has been a member of the Edison Medal committee, board of award of the John Fritz medal, the committee of the Washington Award, and chairman of the executive committee. He is a past-president of the former National Electric Light Association and of the Association of Edison Illuminating Companies.

Papers of Louis A. Ferguson