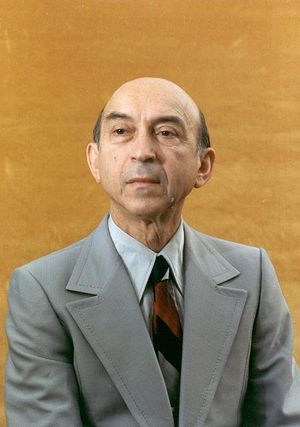 After the family moved across the Soviet border to Iran, Zadeh studied at Alborz College, an American Presbyterian Missionary School in Teheran, and later at the University of Teheran, from which he received the B.S. E.E. degree in Electrical Engineering in 1942.

During World War II, he sold goods to the American Army, earning enough money to continue his education in the United States. He traveled to the United States in 1944 and entered the Massachusetts Institute of Technology, to pursue graduate studies, and received the M.S. degree in Electrical Engineering in 1946. Subsequently, he joined the faculty of Columbia University as an Instructor in Electrical Engineering, where he earned the Ph.D. degree in 1949. He was promoted to Assistant Professor in 1950, Associate Professor in 1953, and Professor in 1957. In 1956, he was a member of the Institute of Advanced Study, Princeton, N.J.

At Columbia University, Zadeh taught courses in electromagnetic theory, circuit analysis, system theory, information theory, and sequential machines. His doctoral dissertation initiated a new direction in frequency analysis of time-varying networks. In 1950, he co-authored, with Professor J. R. Ragazzini, a seminal paper on an extension of Wiener's theory of prediction. In 1952, he co-authored, also with Ragazzini, a paper on sampled-data systems which led to the widely used method of z-transformation.

In 1959, Zadeh left Columbia University to join the faculty of Electrical Engineering Department at the University of California, Berkeley. He was named chair of the department in 1963. During his five-year tenure as chair, the name of the department was changed to Electrical Engineering and Computer Science. Zadeh became Professor Emeritus in 1991 and continued teaching and researching at Berkeley in his capacity as Director of the Berkeley Initiative in Soft Computing.

After moving to Berkeley, Zadeh focused his attention on linear systems and automata theory. This work led to his collaboration with Prof. Charles Desoer on a text on linear system theory entitled "The State Space Approach," which laid the foundations for the modern approach to systems analysis and control.

In 1965, Zadeh authored his seminal paper on fuzzy sets. This landmark paper initiated a new direction which, over the past three decades, has led to a vast literature and a rapidly growing number of applications ranging from consumer products to subway trains and decision-support systems. In the future, the impact of fuzzy set theory-or fuzzy logic, as it is commonly referred to today-is likely to be felt not only in the realm of products and manufacturing, but also in the basic sciences, and especially in mathematics, physics and chemistry.

In 1962, Zadeh was Chairman of U.S. Commission VI of the International Scientific Radio Union (URSI), a Fellow of the IRE as well as a member of the AIEE, the American Mathematical Society, the American Physical Society, the Institute of Mathematical Statistics, the Association for Computer Machinery (late a Fellow), the Society for Industrial and Applied Mathematics, Tau Beta Pi, Eta Kappa Nu, and Sigma Xi. During his career, he as also a member of the National Academy of Engineering and a Foreign Member of the Russian Academy of Natural Sciences. Among his other awards are the Ronda Prize, the American Society of Mechanical Engineers' Rudolf Oldenburger Medal, the Grigore Moisil Prize, the Kampe de Feriet Medal and several honorary doctorates. Dr. Zadeh was a fellow of American Association for the Advancement of Science, and the American Association for Artificial Intelligence.

Zadeh received more than fifty engineering and academic awards. He was a Fellow of the IEEE and a recipient of the 1973 IEEE Education Medal, the 1992 IEEE Richard W. Hamming Medal, an IEEE Centennial Medal, and the IEEE Medal of Honor in 1995 "For pioneering development of fuzzy logic and its many diverse applications."

Zadeh died at home in Berkeley, California on Wednesday, 6 September 2017 at the age of 96. He was to be buried in Baku. Zadeh's son Norman was his only immediate survivor. His wife, Fay, died earlier in 2017. They had two children, Stella and Norman. His daughter, Stella, died in 2006.. His outside interests included photography and HI-FI.