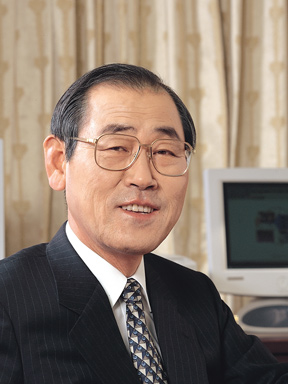 Jong Yong Yun has served as CEO of Samsung Electronics Co., Ltd. since 1997. Faced with a financial crisis in the Asian market, one of Mr. Yun’s first initiatives as CEO was to institute a massive reorganization effort and instill a corporate culture that stressed continuous innovation. For the next 10 years, under his leadership, Samsung’s revenues grew five-fold to $103 billion., achieving a ranking in the Top 50 companies in the 2007 Fortune Global 500.

Mr. Yun envisioned the future direction of the TV industry and predicted the transition from analog to digital TV. During his tenure, Samsung has become a global consumer electronics technology leader in some of the fastest-growing segments of the electronics market—digital TV, flash memory and liquid crystal displays.

Mr. Yun is one of the key players in partnering Samsung with Seoul National University to initiate a special scholarship program for talented young students abroad. This program provides the financial support for the selected students to obtain their master’s degrees and an opportunity to be employed by Samsung afterward.

Mr. Yun has received a number of awards for his leadership at Samsung including Asia’s Businessman of the Year award from Fortune, and the Outstanding Achievement Award in Management from the Institute of Industrial Engineers. He also has been recognized as one of BusinessWeek’s Top 25 Managers of the Year, and was named one of the World’s 30 Most Respected CEOs, according to Barron’s. Mr. Yun is also chairman of the Accreditation Board for Engineering Education of Korea and president of National Academy Engineering of Korea. He holds a bachelor’s degree from Seoul National University, Korea.