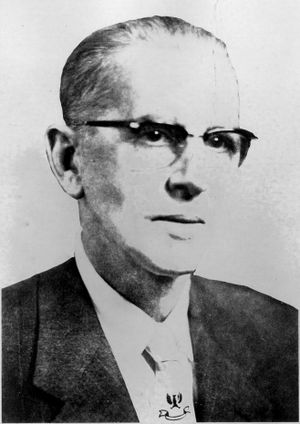 John G. Ferguson was born on June 5, 1892 in Brewarrena, Australia. He received the Bachelor of Science degree in Electrical Engineering from the University of California in 1915, and after spending the following year there as Research Assistant, received the Master of Science degree in Physics in 1916. He immediately joined the engineering department of the Western Electric Company, later incorporated as Bell Telephone Laboratories. In 1922 he was appointed supervisor of electrical measurements and advanced to the position of Transmission Measurement Engineer in 1948. Upon his retirement from the Laboratories in 1957, he joined Lockheed Electronics Company and served as engineering consultant until 1963.

Mr. Ferguson pioneered in the development of precise measurement of frequency, capacitance, inductance, attenuation and phase as required for developing new communication systems that included coaxial cable, microwave relay and ocean telephone cable projects. In 1923, he devised a method of tuning fork control which made it possible to gain two orders of accuracy over conventional tuning fork standards. At the same time he introduced the use of the cathode ray tube for making precise frequency comparisons. His further work in frequency measurements led to the completion of the new Bell System Primary Standard of Frequency in 1951 with one part in a billion accuracy. The world's most accurate public clock was controlled by this standard.

As early as 1918, Mr. Ferguson perfected the "step-up" technique of wide-range capacitance standardization which, in combination with his application of the Wien bridge in 1928, made it possible to measure capacitance with an accuracy comparable to the primary standards of resistance and frequency. This work was soon followed by his development of Owen and Maxwell type bridges for precise measurement of inductance and marked the end of cumbersome inductance standards in general measurement service. During World War II, he contributed inventions in the Magnetic Gradiometer used for exploring the earth's magnetic field. Later he directed and guided development of "sweep" and "rapid comparison" methods of measuring attenuation, phase and, delay at frequencies up to 20 megacycles.

His contributions to the field of electrical measurement are documented in many published articles which include his classic papers on shielding and classification of bridge methods of measuring impedance. He also contributed the section on "Measurement of Primary Electrical Quantities" in Pender-McIlwain Electrical Engineers Handbook. He holds patents on frequency control, electrical standards and magnetic detectors.

Mr. Ferguson was a member of Sigma Xi and AAAS, and a Fellow of IEEE. He served on technical committees of AIEE, ASA and ASTM in various areas of instruments and measurements. control and recording systems and electric and magnetic units.

On the personal side John Ferguson and his wife. Aileen Foster, had one married daughter, Joan F. Utterbach and four grandchildren. He was a Trustee of Green Mountain Club, from 1933 to 1937, and continued long afterwards to walk the mountain trails as a top hobby.