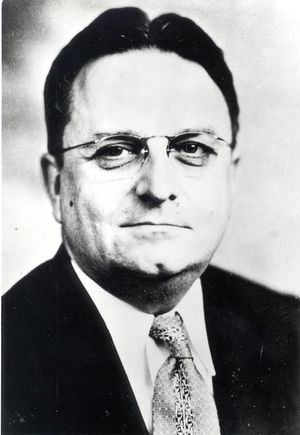 Born 8 May 1907 in Columbus, Ohio John Ryder received his Bachelor and Master's Degree in Electrical Engineering from Ohio State University and his Ph.D. from Iowa State University. In his prolific career in industrial electronics and education, Ryder worked for General Electric and Bailey Meter Company. He had twenty-four patents, including one for possibly the first on-line analog process computer for calculating and controlling gasoline production. He was on the faculty of Iowa State University. He served as head of the Electrical Engineering Department at the University of Illinois and as Dean of Engineering at Michigan State University from 1954 until his retirement in 1972. He was the author of seven textbooks in the fields of electronics and circuits. His special interest in international education systems led him to travel to various parts of the world, including South America, Indonesia, Australia and New Zealand.

John D. Ryder's long affiliation with the IRE began as Associate in 1929. He advanced to Senior Member in 1945 and Fellow in 1952. His national committee chairmanships included Appropriations, Editorial Board, Education, Executive, Nominations, and Policy Advisory. He was a Director from 1952-1959, Editor in 1958-1959, and President in 1955. Other IRE committee memberships and assignments included Finance, Professional Groups, Papers Review, Editorial Reviewer, and Membership Relations Coordinator. He was principal founder of the Education Group in 1957 and served as chairman in 1957-1958. He was instrumental in the creation of the IRE Student Quarterly in 1954. He was the IRE representative and vice-chairman of the IRE-AIEE Electron Tube Conference in 1951 and a member of the committee of fourteen which planned the merger of the IRE and AIEE.

In IEEE, Ryder served as the first Editor in 1963-1964, and Spectrum was started under his direction. He was a Director in 1963-1964 and executive vice-president in 1974. He served as chairman of the Fellow Committee in 1972-1973 and the History Committee in 1975-1977. He was guest Editor of the special bicentennial issue of Proceedings of the IEEE in September 1976. He was a member of the AdCom of the Education Group and chairman of the IEEE Centennial Committee. He received the IEEE Haraden Pratt Award in 1980. Ryder was president of the National Electronics Conference in 1953, chairman in 1965, and NEC Man of the Year in 1970. He was president of Eta Kappa Nu in 1956 and served as chairman of the Electrical Division of the ASEE.

IEEE Merger Collection - a collection of correspondence and records pertaining to the IEEE Merger, which Ryder had a significant part in.