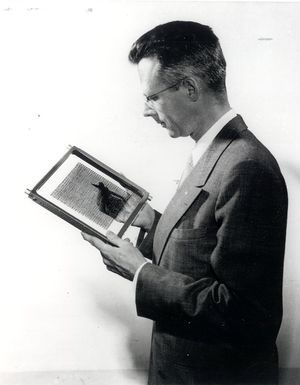 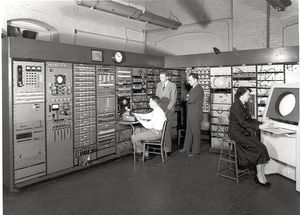 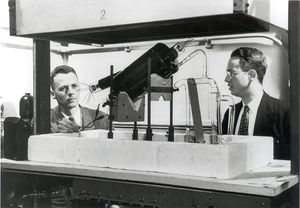 Jay W. Forrester was born 14 July 1918, twenty miles from the nearest town of Anselmo, Nebraska, on a cattle ranch which had been homesteaded by his parents, Duke and Ethel Forrester. He received the degrees in Electrical Engineering-B.S. from the University of Nebraska in 1939 and S.M. from Massachusetts Institute of Technology in 1945. Initially at MIT he also served as a Research Assistant, being engaged in teaching and in the development of high-voltage electrostatic generators. In 1940, he was a cofounder of the Servomechanisms Laboratory at MIT and spent the war years in the development of hydraulic servomechanisms for gunfire and radar antenna control.

From 1944 to 1951, Forrester was Associate Director of the Servomechanisms Laboratory at MIT. Late in 1944, he was in charge of a project to develop a real time simulator of flight behavior of multi-engined aircraft. Originally, the simulator was conceived in terms of analog technology but early in this work, Forrester perceived that design limitations would prevent the achievement of adequate dynamic accuracy of the simulator and the program was switched to an investigation of digital technology. Within just a few years, the work became fully committed to digital technology and the aircraft simulator project emerged as a digital computer for real time simulation.

In 1951, Forrester founded the Digital Computer Laboratory at Massachusetts Institute of Technology, which he directed until 1956. During this period, he was one of the outstanding pioneers in the formative period of the digital computer art. Although his best known contribution is the invention and development of coincident-current, magnetic core memory, he made many other fundamental contributions to the organization, design, reliability, and the use of digital computers.

In 1951, Forrester became head of the division of newly-formed Lincoln Laboratory at MIT which was responsible for the design of the SAGE air defense system. As such, he was again a pioneer, but this time in the use of the new digital computer as the fundamental element in a large scale, real-time information processing system. He and his group made many contributions to the art of system design, software development, and test and evaluation, as well as to the continued improvement of computing hardware, displays, and communications.

In 1956, Forrester returned to the academic staff of MIT as Professor of Industrial Management in the Sloan School. His major interest since then was in the application of feedback theory, information systems, and digital simulation and modeling to the understanding and design of social systems. He was the author of numerous books -Industrial Dynamics (MIT Press 1961), Principles of Systems (Wright-Allen Press 1968), Urban Dynamics (MIT Press 1969), World Dynamics (Wright-Allen Press 1971), which indicate the scope and importance of his work.

Forrester is a Fellow of the IEEE, a Fellow of the American Academy of Arts and Sciences, a Fellow of the Academy of Management, a member of the National Academy of Engineering, and numerous professional societies. Among his honors are honorary doctorates from the University of Nebraska (1954), Boston University (1969), Newark College of Engineering (1971), the Inventor of the Year Award from George Washington University (1968), and the Valdemar Poulsen Gold Medal of the Danish Academy of Technical Sciences (1969). He was awarded the IEEE Medal of Honor in 1972, "For exceptional advances in the digital computer through his invention and application of the magnetic-core random-access memory, employing coincident current addressing."

The Computer Pioneers: The Whirlwind Computer - A video oral history with the Whirlwind team, including Forrester

Oral History with Forrester conducted by David Allison of the Smithsonian.