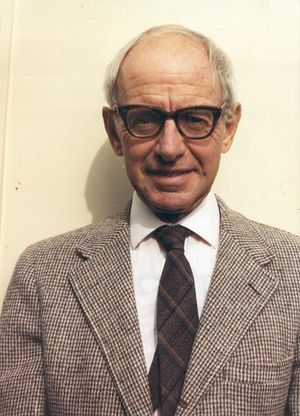 James R. Wait was born on January 23, 1924 in Ottowa, Canada. During World War II he was in charge of a radar maintenance group at Kingston, Ontario. He received all of his post-secondary and graduate education at the University of Toronto, where he earned his bachelor's (1948) and master's (1949) degrees in engineering physics, and his PhD (1951) in electrical engineering. Wait worked for Newmont Exploration in Jerome, Arizona between 1948 and 1951, where his work led to numerous patents within the field of geophysical prospecting.

From 1952 to 1955 he was a section leader in the Defence Research Telecommunications Establishment in Ottawa and was primarily concerned with electromagnetic problems. Since joining the National Bureau of Standards in 1955, Dr. Wait has concentrated on the theoretical aspects of radio propagation. Wait then worked with the National Oceanic and Atmospheric Administration. Throughout his career as a researcher and teacher, Wait focused mostly on radio-wave propogation theory.

Dr. Wait was a Fellow of the Institute of Electrical and Electronics Engineers. He was also on the Administrative Committee of the PTG on Antennas and Propagation and he was a member of the U. S. National Committee of the URSI.

In 1980, Wait became a professor of electrical engineering and geosciences at the University of Arizona in Tucson, and in 1988, was appointed as a prestigious Regents' Professor. He won the IEEE Heinrich Hertz Medal in 1992. Wait died in Tucson on October 1, 1998.