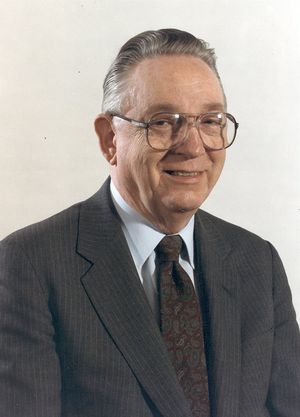 James B. Owens was born in Texas on 2 July 1920 and died in Lincolnshire, Illinois on 2 November 2009. He received his B.S. degree in electrical engineering from Rice University in 1941. He studied radar system design in the Radiation Laboratory at MIT. In 1947 he attended the Westinghouse Advanced Electrical Design School.

During World War II he worked in Westinghouse as a military radar components designer. In 1954, he joined the I-T-E Circuit Breaker Co. as a designer of electrical power switching equipment. In this company he held positions of Vice-President-Engineering and President-Power Equipment Group. Under his direction the company developed a line of SF6 insulated compact switching stations that gained favor in the electrical utility industry. In 1971, I-T-E SF6 insulated switching stations were named an outstanding engineering achievement of the year by the National Society of Professional Engineers. With the merger of I-T-E and Gould, Inc. in 1976 he was elected a Vice President of Gould and a member of the Company Operating Committee. In 1979, he was chosen to be President of Gould-Brown Boveri, a joint venture company designing and manufacturing electrical transmission and distribution equipment.

Mr. Owens has been a member of the IEEE since 1945. In 1969 he was elected to the grade of Fellow "for significant contributions to the science of circuit protection, and for guidance and contributions on the formulation of U.S. and International Standards." He has served the Institute on the Standards Board, as Chairman of the Switchgear Committee, and as President of the Power Engineering Society. He was Institute President in 1983 and was on the Institute Board of Directors from 1981-1984.

He has served the electrical equipment industry in many activities leading to the creation of national and international standards. These include service on NEMA technical committees and on the NEMA Power Equipment Division Board of Directors, on standards committees of ANSI, and as a member of United States delegations to the International Electro-technical Commission.

Mr. Owens lives with his wife Bette in Lake Forest, Illinois. His son Craig lives in New York City; his son Eric is attending Northwestern University. He is interested in music, sailing, and amateur radio. He is currently working as a Vice-President and member of the Board of Directors of Packer Engineering Associates in Naperville, Illinois.