Difference between revisions of "Istvan Nagy" 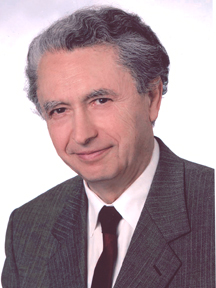 István Nagy, research professor at Budapest University of Technology, Hungary, conducted early research on excitation systems of turbine generators that fueled the development of four generations of large excitation systems for electric power plants in his home country and much of Middle and Eastern Europe. His department at the Research Institute of Automation and Computation jointly with another department in Budapest developed a fully automatic fuel handling system for nuclear power plants. Under his direction his department also developed high frequency inverters used in induction heating, single and three phase uninterruptible power supplies and inverter fed drives. Currently, his research team has been involved in environmentally friendly power production, specifically the efficient use of waste and renewable energies, including solar energy. An IEEE Fellow, Dr. Nagy has 13 patents and published over 250 papers and has previously received the Szechenyi prize that is the highest ranking in science in Hungary.