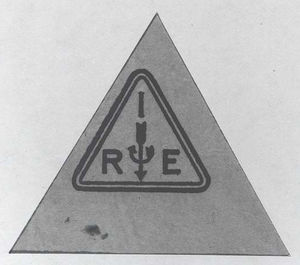 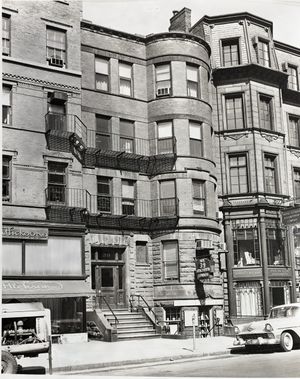 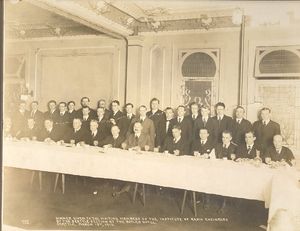 Picture taken at dinner given for the visiting members of the Institute of Radio Engineers by the Seattle Section of the Butler Hotel, Seattle, on March 19, 1916 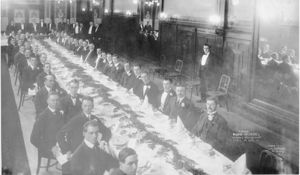 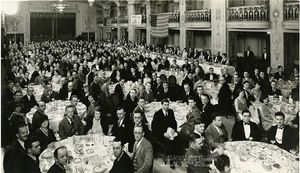 At the turn of the century, a new electrical technology, radio, or wireless as it was originally known, emerged out of principles coming from physics, most notably the electromagnetic spectrum. Italian inventor Guglielmo Marconi’s 1901 wireless broadcast of Morse code across the Atlantic began a global period of feverish activity, especially among young men with an technological bent. It was the “hot” technology of the day. By 1912, it was a young profession, with radio telegraph stations connecting ships at sea. A small group of men representing local societies in New York and Boston met in New York in May 1912, and led by Robert Marriott, Alfred Goldsmith, and John V.L Hogan, formed the Institute of Radio Engineers, merging the Society of Wireless Telegraph Engineers (formed in Boston in 1907) and the Wireless Institute (formed in New York in 1909). Marriott became the first IRE president. To a large extent, they modeled their Institute on the AIEE, with membership grades, a journal, local sections, standards activities, and technical meetings, but there were other influences as well. They established their journal, the Proceedings of the IRE along the lines of scientific journals, with papers directly submitted and peer review, which allowed for faster publication than the AIEE’s policy that papers be presented at meetings first. They deliberately did not include “American” in their name, to signify the transnational nature of radio.

Radio itself was transformed by the development of the vacuum tube amplifier, the first electronic device, from its origins in the Audion three-element vacuum or electron tube, patented in 1906 by inventor and 1930 IRE President Lee de Forest. Morse code yielded to sound and radio broadcasting swept the world. Between 1920 and 1930 the number of U.S. homes with radio climbed from 0 to 14 million. Radio broadcasting evolved towards  large interconnected systems of radio networks, such as the United States' NBC and CBS.

The Rise of Electronics

The 1940s electronics rose to a new prominence as governments throughout the world organized their scientists and engineers to devise technologies for use in World War II. One set of efforts produced pioneering electronic digital computers such as Colossus in England and ENIAC the United States that used thousands of vacuum tubes. An even larger effort, centered on the euphemistically named Radiation Lab established at MIT, developed radar as an important war tool. To the chagrin of IRE , physicists played a far more prominent role in these advances than engineers. With the invention of the transistor, the first solid state electronic amplifier and switch in 1947, the possibilities for electronics seemed endless. 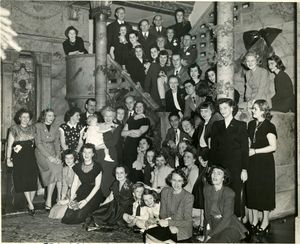 The IRE in  grew rapidly alongside these changes, expanding from 6,000 members in 1940 to 17,000 members in 1945 and 21,000 members in 1950, In 1948, IRE adopted a decentralized “professional group” structure that allowed it to incorporate the new fields, such as electronic computers and information theory, hold specialized conferences, and publish specialized journals.  In 1956, the IRE passed the AIEE in the number of student members as students increasingly turned to electronics. In the following year IRE became the larger society in total number of members as well with both societies over 50,000. While the IRE had always accepted members from other countries, most of whom joined to receive its highly regarded journals, that number grew as well, and IRE members formed sections in countries including Japan, Italy, Israel, and Colombia.  By the early 1960s, IRE had over 90,000 members.   The relative rate of growth, and the increasing centrality of electronics to all parts of electrical engineering, led to increased interest on the part of both societies to  merge and form a single society that would be a single center for all electrical engineers. The two societies merged on January 1, 1963 to form the Institute of Electrical and Electronic Engineers. (IEEE)

The two books the IEEE published in 1984 on the occasion of the centennial of the older predecessor organization, AIEE: