[Are you a member of this section? Please help expand the article by using the edit tab...] 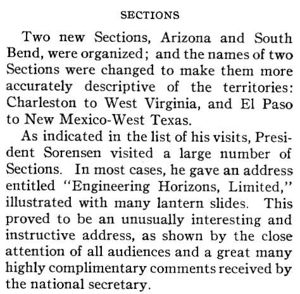 Announcement of Arizona Section in the 1941 Report of the Board of Directors of the AIEE.

The first Phoenix Section Chair was Ben Ferguson, accompanied by Section Secretary W. H. Croft of the Central Arizona Light & Power Company, known since 1952 as Arizona Public Service Company (APS). In 1920 Ben Ferguson worked as an engineer for the Arizona Corporation Commission. As of August 1, 1941, the Section had 28 members.

The first IRE Phoenix Section Chair, Gerald C. Rich, filed the patents "Semi-Conductor Unit" and "Transistor Unit" in 1953 that indicate he worked for Motorola at the time. He resided in Scottsdale.

Mike Andrews, the 2013 Region 6 Director, recalls that he was Region 6 Southwest Area Chair when Earl Robbins was Section Chair in 1982. In the 1970s Section meetings were held at a restaurant near Central & Indian School Rd. in Phoenix. The Section bank account was with Valley National Bank.

From 1951 to 1957 the IRE Phoenix Section Chairs and Secretaries were also listed in the Institute/IRE News and Radio Notes that appeared in the November issues of the Proceedings of the IRE (1951 example). The AIEE Arizona Section Chairs and Secretaries from 1941 to 1951 can be found in the December issues of the Transactions of the AIEE (1941 example). Credit goes to Dr. Sheldon Hochheiser of the IEEE History Center at Rutgers University for chasing down the 1952 to 1962 AIEE Arizona Section Chairs in the AIEE Year Books; AIEE Officers, Committees and Representatives; and the AIEE Organizational Manual.