The IEEE AC is composed only of members represented by individual Section nominees.

The initial plan for the Section / Council structure in Australia was envisaged in 1985 as:

New sections were formed in Western Australia, South Australia and Queensland. The historical links of these sections may be visible from their respective websites. 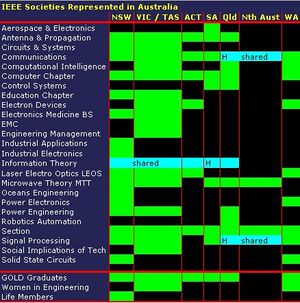 The first agreement by IEEE was with the IEE resulting from discussions by Jim Vasseleu and Leo Young in 1978 and signed circa 1993, modelled off a similar agreement that existed in Northern Italy at that time. Agreement negotiations were handed over from the old ‘Australia Section’ to the newly formed IEEE Australia Council committee - stalling the agreement for 2 years, which was then escalated to IEEE HQ for a delegated signoff. The tri-partite agreement between IEEE, IEE and IEAust was formulated to offer Australian members of 2 or more engineering institutions a discount on membership fees, ranging from 5% to 10%. This was finally ratified on 7 September 1998, signatories were Dr Andrew Parfitt (for IEEE), Barry .?. (for IEAust), and the then president of IEE (?).

In early 2002, the Australia Council decided not to renew the tripartite agreement, and subsequent work and teleconferences were undertaken by the NSW Section to re-focus other sections. The 2002 Australia Council levy to Sections located in Australia was set at AUD$0.50 per member.

In early 2003, a detailed MOU was prepared between the IEEE, IEE and Engineers Australia which bridged the period until the tri-partite agreement could be re-ratified. Refer to the IEEE NSW Section historical archives for a copy this document.

The AC By-laws were revised and updated in March 2003.

The 1998 tri-partite agreement (MOU) of IEE/IEEE/IEAust was not renewed automatically given objections from the Victorian Section. The objections were eventually addressed and a revised agreement was re-ratified on 27 June 2003 with expiry 1 Jan 2006.

A new IEEE / IET and Engineers Australia collaboration agreement was prepared in March 2006 and agreed on 7 April 2006, noting this agreement did not include any multiple member discount arrangements. This agreement is valid to 31 Dec 2008.