Difference between revisions of "Heintz Kaufman"

This entry is dedicated to the Heintz and Kaufman manufacturing business.

The firm was founded by Mr. Ralph Heintz and Mr Jack Kaufman in 1922 (est, to be confirmed) after a major contract with the Dollar Steamship Company for communications equipment..... The plant was located at 50 Drumm Street, South San Francisco, CA.

The Heintz and Kaufman factory operation was a pre-cursor to launch of the EIMAC vacuum tube plant in the early 1930's.

The H&K firm has a rich history of manufacturing aeronautical radio transmitters and possibly receivers(?) and a rare facet that H&K supplied transmitters used for conveying the AC generator status, possibly data(?) from the generating stations located on the Feather River in Northern California back to the Bay Area for the power company (PG&E). source: https://ethw.org/Oral-History:Leonard_Fuller

The following was in a batch of "stuff" initially given to Mr. Marshall Loring who was the last manager of the Eimac'ers Retiree gatherings which ceased operation shorty before he moved to Tennessee. 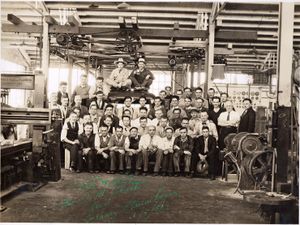 This photo shows the staff at the H&K Plant in 1935. It is from a private collection.

Then, sometime at a future date, he and perhaps several other H&K employees left to go to work for Eitel-McCullough Inc. since they were rapidly growing and hiring in the area.

Along with the photo I found a lengthy letter describing the life of that employee, Irv Coutts, by his wife whom he later met at Eimac. Its all very touching to read her description of their meeting, getting married, working in the same place. That letter and photograph is reproduced here with permission.

The H&K logo apparently was in use well after the company closed. Unsure who ultimately made use of the HK logo in the 60's.

Antique Wireless Association Review Volume #10, 1996. As Sherwood notes, Jack Kaufman left HK in 1946 and joined Garret Lewis to form Lewis and Kaufman who manufactured transmitting tubes under the trade name "Los Gatos". According to the article HK folded in 1953, and their building is now a welder's supply house in Redwood City CA

Refer to the EIMAC page located on the ethw.org website.

This rare photo is outside of places like the archives at Green library at Stanford University or the Perham foundation in San Jose.