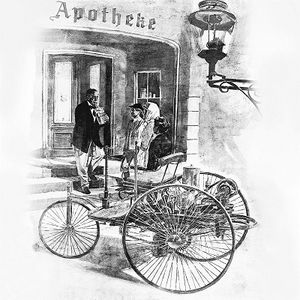 Petroleum is a product with very few direct uses. Production is conveyed to refineries to transform it into other products, like gasoline, which was first discovered accidentally as a waste by-product of the petroleum refining to obtain kerosene for illumination.

In 1861, in New Jersey, a small refinery was operating that only distilled a few barrels of oil for lamps. The operator had the task of checking when the kerosene was condensed. One day he let the flame go more times than it should have, and on his return, the condensate produced inside the jar was not kerosene, but rather that foul-smelling, almost colorless liquid that bothered the operators, ignites very easily, which usually generates with kerosene refining. This incident reported in the chronicles of the early petroleum industry showed empirically how heavy petroleum products could be converted into lighter fractions through more prolonged heat application. This highly volatile liquid was known in the refineries as the unwelcome residual by-product of refining lamp oil and called essence, because it was compared to a natural essence, the essence of petroleum, but then it got the name gasoline. Considered almost useless, too low of a plashing point, in some refineries it was recycled into fuel for boilers in distilling the petroleum. More often, thousands of barrels of it were discharged and floated down the creeks and rivers, and the ground around the refinery was saturated with it.

In the 1860s-1880s, no one in the emerging internal combustion engine industry was really interested in gasoline, because fuels for the early engine prototypes were mostly coal tar distillates and lighter fractions of kerosene for illumination. While new techniques for using kerosene to burn into carburetors were developed, gasoline started to be used as a solvent for general purposes. The first important leap to gasoline for automotive use was made by German engineer Karl Friedrich Michael Vaillant Benz (1844-1929), a graduate of the Karlsruhe Institute of Technology,[1] who built the first gasoline fueled mono cylindric motor prototype in 1879, which finally was patented by Daimler in 1886. In the United States, on September 6, 1892, the first gasoline-powered tractor was manufactured by John Froelich of Iowa. It had a vertical single-cylinder gasoline engine mounted on wooden beams. On June 11, 1895, the first U.S. patent for a gasoline-powered automobile was issued to Charles Duryea of Springfield, Massachusetts.

During 1900-1914, the shift from horse to gasoline fueled horsepower-motors rapidly took place. Petroleum companies were producing gasoline as a simple distillate from petroleum, but the automotive industry created the need for new fuels. Furthermore, production was not keeping up with the pace of the demand. From 1905, ownership of gasoline-powered automobiles in the U.S. began to surge ahead, and by 1907 production, concentrated in Detroit with the Olds Motor Works, Cadillac and Ford, overtook that of France. Standard Oil's forays into Europe and the Far East for new, foreign bases of operations reflected its desire not only to cut transportation costs but also to relieve the pressure on its domestic production capacity to meet the rising home demand for gasoline. In 1903, in Europe, there was a difficulty getting enough gasoline from the United States to satisfy the demands for road vehicles. The supply chain came under pressure to meet the rising demand and the rising oil company Shell in Europe had also just managed to break Standard's monopoly of the small but growing gasoline market in Britain. The number of outlets in London licensed to sell motor spirit leapt from 15 in 1900 to over 150 in 1903. Having struck a rich field of very light crude in Borneo in late 1900, Shell had inaugurated bulk tanker deliveries of gasoline to Thames Haven, Essex, UK. At the end of 1901 Shell also began to deliver gasoline from Sumatra produced by the Royal Dutch, intimating further collaboration between the two companies. In the U.S., by early 1900s, Standard Oil began to import gasoline from Royal Dutch and Shell; this was partly due to the distance of the west coast from the regions east of the Mississippi that produced lighter grades of crude, but more to the difficulties the eastern industry was beginning to experience in meeting the Atlantic region fast growing demand. The arrival of tank steamers with full cargoes of gasoline from the Far Eastern fields to discharge foreign petroleum products at New York seemed like a superfluous task.

There was the evident need for improvement in the refining process for quantity and quality fuels. The engines needed a gasoline that was capable to prevent engine knocking and increase engine efficiency. Numerous processes and agents were needed to improve the quality of gasoline making it a better commodity, especially for the new high compression automobile engines that were being designed. By in the 1910s, gasoline couldn't be just defined as a pure essence fraction of petroleum but rather a blend of several chemicals obtained after passing through numerous processes. In those years, chemical engineers William Burton and Robert Humphreys of Standard Oil patented a method of petroleum refining that significantly increases gasoline yields. Known as thermal cracking, the two chemists discovered that by applying both heat and pressure during distillation, heavier petroleum molecules can be broken down, or cracked, into gasoline’s lighter molecules. The discovery is a boost to the new auto industry, whose fuel of choice now was gasoline.

In the early 20th century, automotive manufacturers were searching for a chemical that would reduce the engine knock effect. In 1921, automotive engineers working for General Motors discovered that tetraethyl lead provided octanes to gasoline and prevented engine knock. While aromatic hydrocarbons (such as benzene) and alcohols (such as ethanol) were well known octanes providers at the time, lead was the preferred choice due to its lower production cost. 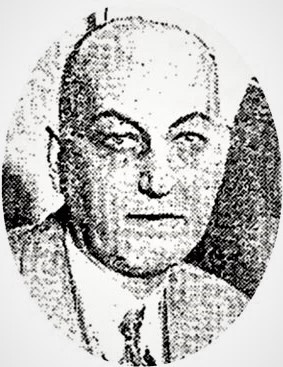 Carbon Petroleum Dubbs (1881-1962)[2] was son of an engineer and refinery director in California. Working on the patents of his father, mainly developed in the California petroleum qualities and properties, and in 1923 after 5 years of investments and research, he achieved a better process for thermal cracking then the leading Burton. Dubbs was undoubtedly one of the most prolific individuals of his time to contribute to the development of petroleum refining with more of 40 patents. Among the most relevant are: U.S. Patent 1,535,209 Expansion Joints (1925)[3]; U.S. Patent 1,715,062 Liquid-Level Gauge for Liquids Under High Pressure and Temperature (1929)[4]; U.S. Patent 1,857,532 Apparatus for Treating Hydrocarbons and the Like (1932)[5]; U.S. Patent 2,080,118 Process for Cracking Petroleum Oil (1937). [6]

With the development of the automobile, gasoline become one of the leading manufactured commodities produced in the United States. The gasoline tonnage in the country was three-quarters that of lumber, nine-tenths that of steel, one and a quarter times that of cement and two and one-half times that of brick. It was estimated that more than 50% of the power developed in the nation last year was developed by gasoline and that automobiles under gasoline propulsion traveled about forty times as many miles as the railroad trains and trolley cars together. By the 1930s, the opinion on what constitutes a good motor gasoline had changed dramatically since the beginning of the century. The attention shifted the light on what the automobile engine demands for optimum performance and of the limitations placed on the material by transportation, handling and storage requirements. Gasoline now was required to have high standards in: 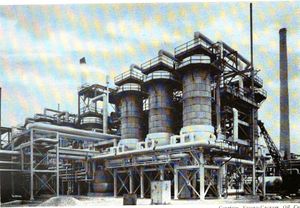 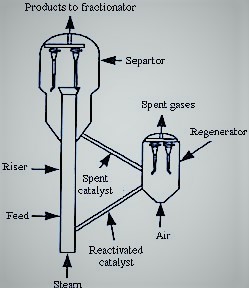 The French engineer Eugene Jules Houdry (1892-1962)[7] conducted experiments on the utilization of catalysts agents to improve the cracking process starting in 1925. In the United States he worked with Socony Vacuum Oil (1930) and then Sun Oil (1932). By using silica and alumina-based catalysts, he demonstrated that not only more gasoline could be produced from petroleum without the use of high pressure but also that it has a higher octane rating and burns more efficiently.

The application of this method for industrial production began between 1936-1937. It was a semi-continuous process with a fixed bed catalyst and provided petrol with anti-knock power and exceptional stability. The presence of a catalyst modifies the course of cracking reactions, favoring the formation of saturated and stable hydrocarbons of the type most suitable for motor fuels.

In 1938, the Catalytic Research Associates was formed to coordinate the research efforts of the R&D units of Standard Oil of Indiana, Standard Oil of Jersey, Shell, and Texaco. Eventually in 1942 the continuous-cycle process was put into practice working with the Fluid Bed Reactor.[8] The continuous processing regime in the plant was ensured by using different catalyst chambers, generally three, placed in parallel. While one of the chambers is in the process of cracking oil vapors, the other two are in a catalyst regeneration stage. This method allows to keep the catalyst at a high degree of activity and for a longer time.

At the same time, another process was patented known as Aquolization, which consisted of cracking in the presence of a large quantity of steam. It produced a good quality gasoline, but at the cost of a huge and expensive quantity of steam. Another step ahead towards the enrichment of gasoline with more octanes was the Thermal Reforming, which used either heat or a catalyst to rearrange a molecular structure of gasoline and giving it more anti-knock effect. It also worked for heavy fuels like diesel. In 1947, the German-born American chemical engineer Vladimir Haensel (1914-2002)[9] invents platforming, a process for producing cleaner-burning high-octane fuels using a platinum catalyst to speed up certain chemical reactions. Platforming eliminates the need to add lead to gasoline. In following years, other methods used to improve the quality of gasoline and increase its supply included:

After 1952, on the example of Platforming several catalytic reforming processes are developed to meet the demand for high-octane gasoline and the restrictions, due to environmental problems, on the use of lead-containing additives. Catalytic Reforming increases the quality of petrol by generating the production of aromatic fuels with a high-octane number. In the Catalytic Reforming process the variation of the boiling temperature range of the charge (of oil) does not take place; no racking processes is done, but molecular rearrangement by means of catalysts based on noble metals, such as platinum and palladium, is activated. Residual hydrocarbon compounds containing high levels of metals, sulfur and nitrogen can deactivate the catalyst so it is necessary to remove them from the charge to the plant. Usually, this operation is completed by mean of the Hydrotreating process in to the hydrotreater unit.[10]

Since the late 1900s, all the major petroleum companies have always played a very fierce battle in the development and manufacturing of car fuels. Often companies studied parallel processes that were “modeled” on the patents registered by companies that had found before everyone else the best solution to avoid paying the royalties. Each oil major had its own method, according to them the most innovative, but which in practice provided the same result except for marginal variations. The business for producing the best gasoline was a great R&D effort that included important collaborations and partnerships between the oil and automotive industry.

Hill, Bennett. “The How and Why of Gasoline Performance”. Proceedings of the American Society for Testing Materials, Part II. (1928): 653-669