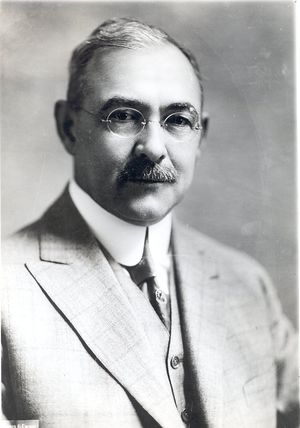 Frederick Lane Hutchinson was born in Elizabeth, NJ in 1866 and began his business experience in the service of the Pennsylvania Railroad Company in one of its principal offices in New York City, where he had several year's experience in accounts, correspondence, and general office work. In 1889 he entered Cornell University and was graduated from the electrical engineering course in 1893, when he entered the employ of the Westinghouse Electric & Manufacturing Company. After several year's experience in the manufacturing, testing, engineering, and sales departments in Newark, NJ, New York, and Pittsburgh, he was transferred to the publication department, where for a number of years, he was employed in preparing the technical literature of the company.

In 1901, he became manager of the publication department of the C.W. Hunt Company, New York, and in the following year became advertising manager of the National Electric Company of Milwaukee. A year later, he was made manager of electrical sales for the same company.

In 1904, Mr. Hutchinson undertook some special work for the AIEE, and in 1908, upon recommendation of Secretary Ralph W. Pope, he was appointed assistant secretary. After Mr. Pope's resignation in 1911, Mr. Hutchinson was appointed, early in 1912, to the responsible executive office of secretary of the Institute, a position he held until his death in 1932.

Mr. Hutchinson became an Associate of the Institute in 1894, and was transferred to the grade of Member in 1913. He was tone of the delegates of the Institute to the World Power Conference, London, 1924, and to the World Engineering Congress, Tokyo, 1929. He has served as a member of various Institute Committees, both before and since he became secretary, and had supervision of several important activities, including publications, coordination of Institute activities, award of Edison Medal, maintenance of Institute headquarters, also a representative of the Institute on Assembly of American Engineering Council, the Division of Engineering and Industrial Research of the National Research Council, and on the Engineering Societies Library Board. He was an enthusiastic worker for the development of the engineering and the enhancement of the engineering profession.

In additional to his membership in the AIEE, Mr. Hutchinson was a member of the American Association for the Advancement of Science, the American Sociological Society, the American Academy of Political and Social Science, and other organizations, including the Engineers' and the Cornell University Clubs of New York.