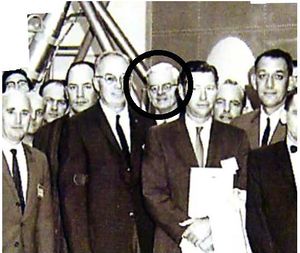 Alden Hutchinson, former VP of engineering for DK Aerospace Co. Attending a showing at Grumman of a LEM mockup during a meeting of SAE space engineers circa 1965-66. 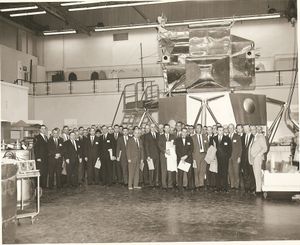 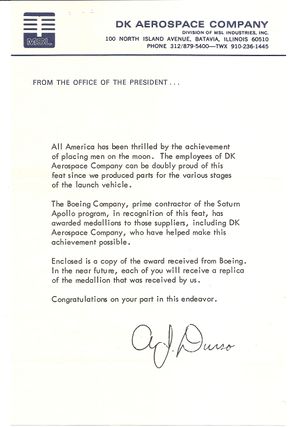 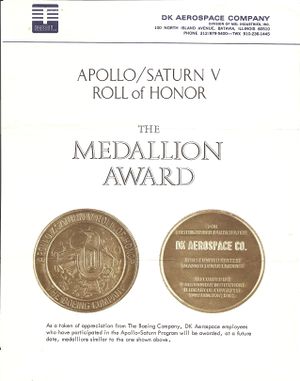 The following was composed as a letter from Robert Alden Hutchinson to his son, September 1995

When the movie "Apollo 13" was going around here it brought back some memories to me of long ago events connected to my work in the aerospace industry involved with NASA and warplane producers. It was during the time of WWII, the Korean War, Vietnam and the race to the moon.

I was telling Charlie about some of the interesting coincidences that tied me into the flight of Apollo 13 and he suggested that I write about them for the family and particularly the grandchildren.

Charlie was going with me to see the movie "Apollo 13" and never made it because of the eye trouble Karen developed before we had a chance to go. But Hazel and I did go the week after when Karen was into her face down routine recovering from the operation on her retina. I knew before going that I had had some important part in the return of that crippled ship and saving the lives of the crew. The movie was more than thrilling to me. It brought back all of the tension and concern that had held me for the entire trip around the moon until the crew was safely pulled from the sea. At the time I was employed by Dunbar Kapple Aerospace Div, Batavia,Illinois as Chief Design Engineer. My employment there extended from 1941 to the fall of 1970. Our principal product was piping for airplanes and rockets as long as the piping included a "bellows" which allowed the pipe to move without losing its ability to convey hot air, fuel liquid oxygen, etc. We received inquires from almost all of the major producers in the aerospace industry needing such piping. There were five or six sub-contractors making piping with bellows so at times the competition for the contracts was intense. Since many of the buyers at the companies knew very little about our product the principal problem was to get past them to visit with the engineers and generate interest in our ability to do the work. Of course all through that period we were learning about the product and the learning flowed back and forth from the engineers to us and from us to the engineers and sometimes the buyers. We were all with some exceptions as untrained as the boys in the armed forces who had to do their learning while dodging bullets.

On the Apollo rocket we were able to get contracts for pipes on the first stage, 2nd stage. 3rd stage and the moon lander stage. This was the stage that lowered the take off module and the men to the moon and stayed on the moon until the men were returning to hook up with the command module which had been orbiting the moon for proceeding back to Earth. The landing stage had one engine assembled by TRW using two of our pipes (including four of our little pin restrained bellows) to convey the hypergolic fuels to the cone shaped firing chamber where the fuels immediately on contact burst into flame directed downward to lower the entire unit to the moon surface. The little bellows were kept from stretching out by a wire pin about .090 inches in diameter. The whole bellows unit was designed by me (I did get into the nuts and bolts at various times) to fire only once for about ten to 15 seconds and then remain on the moon with the lander. Imagine my horror when they decided to reconfigure the crippled rocket and use the landing stage with our little bellows to bring the men back firing the engine for course corrections time and time again.

That little bellows and its pin restraints had given me a good deal more trouble than I have mentioned so far and probably accounts for my white hair. As you may not know every step in our manufacturing process was reviewed by several Air Force inspectors who also took care of NASA's inspection needs. We were happily going ahead with our production of numerous parts including those little pinned bellows when one of the inspectors stopped me on the factory floor and said that one of the pinned bellows had failed in final pressure test at approximately 450 psi(pounds per square inch). Of course he had already reported the failure to TRW and NASA. It wasn't until I got back to the office that I found the real dimensions of the problem. TRW had called very excitedly to our Sales office pointing out that the rocket was already standing on the pad being fueled for the flight of Armstrong, Buzz Aldrin and Collins to the moon which was scheduled for less than five days hence. Remember this was the first manned flight to the moon and national interest in it was intense. In no way would NASA allow the flight to go with an unproven part in the landing stage. To replace the parts would involve draining fuels, taking the rocket back to the assembly building and replacing the fuel lines in the landing stage if it could be done without also replacing the stage. The delay would be weeks with a great impact on NASAs reputation to say nothing of ours. TRW asked our Sales what they were going to do and Sales asked me the same question and said it had to be cleared up in three days or the whole country including President Johnson would be calling for my scalp. Fortunately we had recently hired and equipped a trained metalurgist. So I went to work with him. We pulled the Xrays of the part in question and found a little notch in the welding of the pin which had somehow escaped notice when the Xray had been examined. Reviewing a number of Xrays of other parts we saw that they had no such defect. Also the parts on the waiting Apollo 13 rocket were reviewed and none of them had a defect. We prepared a similar weld on a new part creating the defect and prepared several microphotos of the defect and the non defect. All of the pictures and information were included in a report and sent off to TRW in LA. with our comment that the parts at Canaveral were OK. Apparently NASA was satisfied and they went ahead with the launch on schedule. You know the result: a good flight and a great historical event.

We all breathed easier and enjoyed watching the TV pictures of the launch. Then the little part struck again. Two days after the landing On the moon the man from TRW called getting Sales and me on the line with a message he seemed to get pleasure in delivering. He said "Your parts failed on the moon." Sales knowing the flight had arrived and that the landing had been fine said "Just send them back and we will replace them." What a joker. The TRW man went on to say that as Armstrong was preparing to go down to the moon's surface Aldrin had called Houston and said "We have a pressure build up in the lines to the lander engine" Almost immediately he called back and said" The pressure has gone down everything is OK". (If you get a chance to see the TV of the actual landing and listen closely you can hear Aldrin's report on the pressure build up.) What happened was my little bellow,s pins had broken allowing the bellows to expand thus creating more volume in the lines and lowering the pressure. If the pins had held, the bellows might have burst spraying the hypergolic fuels together or on the hot engine and that would have been the end for Armstrong and Aldrin Who knows when NASA would have made another flight. Later NASA made a change in the shutdown procedure which somehow took the load off the fuel lines during shutdown and the problem did not come up again on the subsequent flights. After the Armstrong flight we went ahead manufacturing the little bellows for the landing stage. As far as I know the same fuel lines and bellows were used in the lander for all the other flights. When Lovell and his mates were preparing for flight we had no idea that any trouble would develop. Then halfway to the moon they had the oxygen tank explosion that blew a panel off and cut down on their oxygen supply so that they could not complete their mission even if the crippled ship could land on the moon. Everyone seeing the movie saw how the crew had to crowd into the one module and on instructions from Houston start to go around the moon using the lander engine for course corrections. I said to myself "That lander engine was only designed to fire once in going down to the moon. What will happen to those little bellows and the small wire supporting them when they fire that engine time and again." They worked and lasted for the whole trip. But every time I heard on the radio or TV that another engine firing was going to be made I prayed for a miracle and it came. The men landed safely in the Pacific. This is not to say that I did not sit in a cold sweat each time those little bellows did their job. Now that lander is somewhere at the bottom of the Pacific instead of sitting on the moon along with all the other landers.

The other bellows and lines we made for the Apollo program all worked as designed on all the flights. Now at the NASA museum located in Cape Canaveral you can see an Apollo rocket lying on its side like the bones of a long dead dinosaur but with all its engines and pipes sticking out for anyone to see. I have seen the beast and have enjoyed seeing all of our parts remembering the joys and troubles we had getting them there. Let Heather and Russell read this for some appreciation for several small details involved in the moon flight.

You have our love,

Back to Oral Histories, Topic Articles, and Milestones related to the Human Space Travel: https://ethw.org/Human_Space_Travel_Primary_Sources