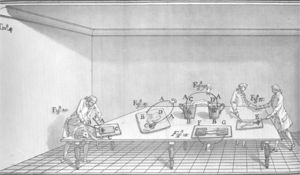 Luigi Galvani (1737-1798) was a physician from Bologna, Italy, whose research into the anatomy and physiology led him to the observation that electrical stimulation caused a dead frog’s leg to twitch. Galvani claimed that this unexpected result demonstrated that muscles and nerves contained animal electricity. Physicist Alessandro Volta proposed an alternative explanation for the twitch, and in the process of disproving Galvani, discovered electrical current.

Galvani began his research in 1766, when he was appointed by the Senate of Bologna to curate the city’s anatomical museum. He was also a lecturer on medicine at the University of Bologna, where he had received his medical training and was expected to give an annual researcher paper. His early research was on the hearing of birds and humans. In the 1770s, he began documenting the physiology of the nerves and muscles of the frog. He offered papers on the effects of stimulation and opiates on the nerves of frogs.

In 1780, Galvani attempted to standardize his research methods by preparing carefully dissected frogs for study. He wanted to understand how static electricity generated responses in the specimens. Galvani and his assistants dissected each frog’s spinal cord, crural nerves, and lower limbs and removed the skin to expose nerves and muscles. As they prepared these experiments, Galvani’s team began noticing strange phenomenon. According to one story, an assistant was applying a scalpel to a frog’s crural nerve when a nearby electrical generator sparked. The frog’s leg twitched.

Galvani found that he could produce a muscle contraction if he put a frog’s legs on a sheet of glass, touched a crural nerve to a ground conductor, and then drew a spark from an electrostatic generator. This occurred even though the spark did not directly touch the frog’s legs. In fact, it worked even when the frog’s legs were far from the machine.

Along with his experiments using electrical generators, Galvani tested the application of lightning to the frog’s legs. He attached brass hooks to the spinal cords of frogs and hung them on iron rails. Contractions occurred, as expected, during flashes of lightning, but they also happened when the weather was good. Galvani also determined that these contractions could be produced in the laboratory by putting a brass hook through the frog’s spinal column, putting the leg on an iron plate, and pressing the brass hook against the iron plate.

As he witnessed biological matter come to life with a spark, Galvani interpreted the results through the theory of animal electricity. Like many other eighteenth century scientists, he believed that animals possessed a fluid in their nerves and muscles similar to ordinary electricity. The muscles, he concluded, were like a Leyden jar that held electricity and the nerves were conductors. Within the body, this animal electrical fluid was positively charged as circulated from brain to muscle through the nerves. Outside electricity had a negative charge that upset the body’s internal balance, causing a twitch. Galvani published these startling findings beginning in the mid-1780s, and released a major study, “Notes on the electrical forces in the movement of muscles,” in 1791.

Alessandro Volta of the University of Pavia took an early interest in Galvani’s work, but soon began to doubt the theory of animal electricity. He argued that electricity could be produced without the intervention of animal tissue, such as through the contact of two metals in a moist environment. Galvani’s frogs, he discovered, were not vessels of electrical current, but instead held the potential for a reaction when exposed to metal: they were conductors of electricity, not its source.

Galvani and Volta’s competing positions produced a decade of experiments that led to Volta’s development of the first battery in 1800. Scientists recognize Galvani as the discoverer of bioelectricity, even as his rival Volta’s discovery of electrical current remains the lasting legacy of their experiments.

Galvani and the Frankenstein Story