Difference between revisions of "Early Electrification of Buffalo"

The City of Buffalo is located in western New York State at the junction of Lake Erie and the Niagara River. It is approximately ten miles north-to-south and six miles east-to-west with an area of 42 square miles. Niagara Falls is located 20 miles north of the city. In 1900 Buffalo, with a large commercial and industrial base, was the eighth largest city in the United States.

Buffalo, the Queen City of the Lakes, was an up-to-date city at the end of the 19th century and electric lights were in the forefront.  "I went to the city to see the great sights and there I saw what they call ‘lectric lights. Now I think I know what I’m talking about ‘cuse they put them up in bottles and you can’t blow them out.” <ref>A ditty repeated in the author’s youth by his father Harry Woodworth (1893-1970).</ref>

The earliest electric lights were arc lights. The electric discharge between two carbon or other type electrodes gave a brilliant light suitable for lighting streets, large stores and halls but not homes. Arc lights for street lighting were usually on constant-current series circuits.

Charles Brush was a pioneer in the development of arc lights. In July 1881 the Brush 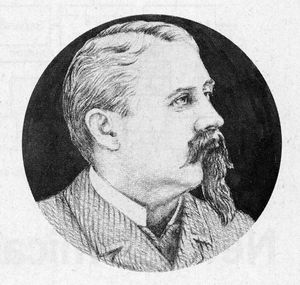 Electric Light Company of Buffalo installed the first electric plant in Buffalo on Ganson Street along the City’s waterfront. A 30-hp steam engine driving a generator with a capacity of forty 2,000-candlepower arc lamps supplied twelve carbon arc lights extending a mile along the street. In August a second station was built in the New York Central Railroad’s Chicago St. roundhouse supplying thirteen arc lights in the Exchange Street Depot. A third station was added in 1882 at Wilkeson and Mohawk Streets near the present City Hall to extend arc lighting service to many other streets, churches, public meeting places, hotels and other business places. The Buffalo Electric Light and Power Company also had its machines installed at Brush’s Wilkeson Street Station. This location was used as an electric company station for 120 years. 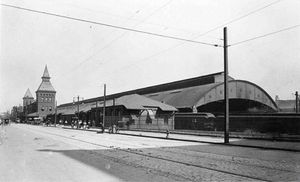