Difference between revisions of "Donald Towsley" 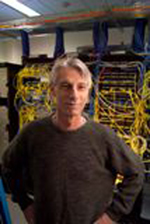 Donald Towsley is a distinguished professor in the Department of Computer Science at the University of Massachusetts in Amherst and a leading scholar in developing foundational modeling and analysis techniques used by researchers worldwide to better understand the performance of computer and communication systems and networks. His seminal work includes network tomography, sample path analysis of networks and analytic modeling of the transmission control protocol.

In the 1980s, he was among the first to develop early models of distributed computer systems and parallel processing systems with a particular focus on scheduling. More recently, he developed foundational techniques for analyzing and studying the propagation of Internet viruses and worms, and his work on the analytical evaluation of TCP throughput is among the most notable results obtained in networking research in the last few years.

An IEEE Fellow, he previously received the IEEE Communications Society William Bennett Prize Paper Award. He is editor in chief of IEEE/ACM Transactions on Networking.