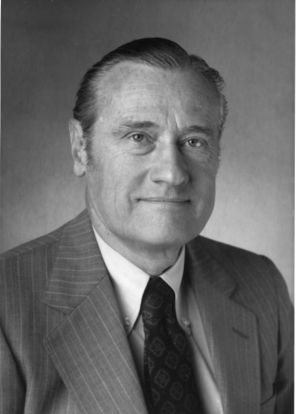 Born in Omaha, Nebraska in 1922, Dean A. Watkins received his B.S. degree from Iowa State College in 1944, his M.S. degree from California Institute of Technology in 1947 and his Ph.D. from Stanford University in 1951. He served in the U.S. Army Corps of Engineers in both Europe and the Pacific in Worki War II. While a student at Stanford, Dr. Watkins was co-inventor of a low-noise traveling wave tube.

Early in his career, he was a design engineer for Collins Radio Company in Cedar Rapids, Iowa. He spent a year during 1948-49 on the staff of Los Alamos Scientific Laboratory. Later, he was with the Research Laboratories of Hughes Aircraft Company in Culver City, California, where he designed and tested the first helix backward-wave oscillator. He subsequently became head of that firm's Microwave Tube Department.

Dr. Watkins joined the faculty of Stanford University in 1953 when he was appointed Associate Professor of Electrical Engineering. He was advanced to full professorship in 1956 and continued in that capacity until the end of 1963.

In December of 1957, he and Dr. H. Richard Johnson co-founded Watkins-Johnson Company to develop and manufacture microwave electronic components. Early successes in traveling-wave tube technology led to steady expansion of the company's product line. Under Dr. Watkins' leadership, the firm became an innovator in the application of solid-state techniques to microwave devices. Today, with Dr. Watkins as its chairman, Watkins-Johnson Company is a medium-sized corporation employing more than 2,800 people worldwide. In addition to microwave components, its products now include integrated assemblies, sub-systems, instruments, test equipment, production furnaces for the semiconductor industry, antennas and complete computer-controlled systems for reconnaissance and electronic countermeasures misssions.

His leadership has been recognized by the electronics industry on numerous occasions. In 1957, he was the recipient of the annual Electronic Achievement Award of the Seventh Region of the Institute of Radio Engineers. The following year, he was named a Fellow of the IRE, now the IEEE. He served as a director and chairman of the San Francisco Council of the Western Electronics Manufacturers Association, now American Electronics Association.

He was a consultant on electron devices to the Director of Defense Research and Engineering from 1956 to 1966. He was elected to the National Academy of Engineering in 1968.

Dr. Watkins was appointed to the Board of Regents of the University of California in 1969 and served as chairman of the board from 1972 to 1974. He is a member and past chairman of the Board of Overseers of the Hoover Institution on War, Revolution and Peace at Stanford University. He has served as a director of the California Chamber of Commerce since 1975 and during 1981 serves as its president.

He and his wife, Bessie, reside in Woodside, California. They operate a cattle ranch in California and enjoy riding and hunting. Their three sons are, respectively, an architect, a computer engineer, and a zoologist.