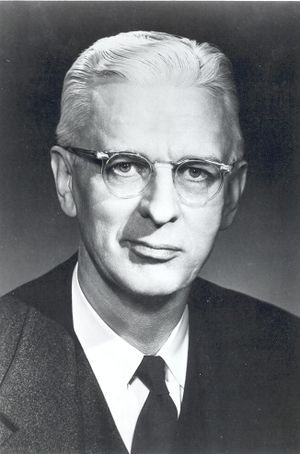 His career included manufacturing, engineering and executive responsibilities with the General Electric Company beginning in 1924. From 1953 through 1959, Mr. Linder was Vice-President of Engineering. In 1960 he became Vice-President and Group Executive, Electric Utilities Group. He retired from G.E. in 1963 and then became a research professor of electrical engineering at Union College. He was also on committees at Harvard University and the Massachusetts Institute of Technology.

Clarence Linder's participation in IEEE and its predecessors, the AIEE and IRE, extended continuously throughout his professional career. A Fellow of AIEE, he was President in 1960-1961, and served as President of IEEE in 1964. He was President of United Engineering Trustees from 1962-1963; President, Engineers Joint Council, 1966-1968, and a Founding Member of the National Academy of Engineering serving as Vice-President from 1966-1970 and President, 1970-1973. From 1970-1973, he was Vice-Chairman of the National Research Council and served as Chairman of the Committee on Science and Technology in the Railway Industry, and on the Committee on Scientific and Technical Communication. He was a Fellow of ASME, a registered Professional Engineer and active in the National Society of Professional Engineers.

Worcester Polytechnic Institute awarded him an Honorary Doctor of Engineering in 1955 as did Clarkson College in 1956. Later degrees of Honorary Doctor of Laws were bestowed by Union College and Lehigh University in 1965 and 1972 respectively. Additional recognition as an academician are indicated by Mr. Linder's membership in Tau Beta Pi; Distinguished Alumnus Award (University of Texas, 1962); and appointment as a Trustee for Vermont Academy and the Thomas Alva Edison Foundation.

Mr. Linder was awarded the 1976 IEEE Haraden Pratt Award. His citation read: 'In recognition of Clarence H. Linder's dedicated service to the engineering profession, to the American Institute of Electrical Engineers and to the Institute of Electrical and Electronics Engineers as Director and President of both AIEE and IEEE, as President of the United Engineering Trustees, for his service to the profession as President of the National Academy of Engineering, for his strong support in the establishment of the United Engineering Center and particularly for his leadership in planning and perfecting the merger of AIEE and IRE, the Board of Directors confers this Award in deep appreciation of his many contributions to the Institute.'

Clarence Linder managed to crowd community affairs as an interleaf of his professional and business activities. He was active as a Director of the Schenectady Rotary Club and as a State Director of the American Cancer Society. Another direction of leadership was in executive capacities with the Reformed Church in America, at local, national and international levels. He also enjoyed time spent with his family. He was married in 1931, to the former Sara Hollister, who died in 1961. The couple had four daughters and a son.

Clarence Hugo Linder passed away on 3 May 1994.